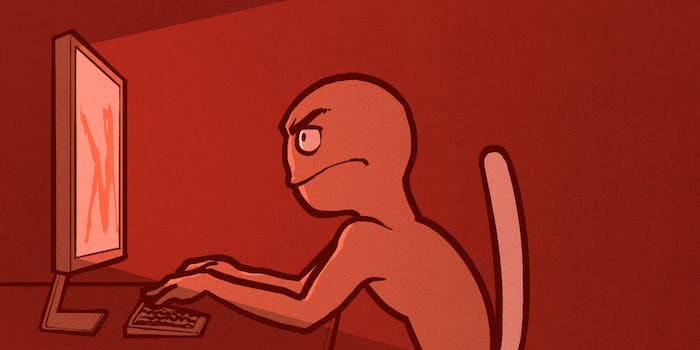 Last December, Chicago-based journalist Amy Guth was on-air during her weekly WGN radio show when she glanced at the screen in the studio which displays listener messages received during the broadcast. Guth, who is also president of the Association for Women Journalists Chicago, noticed that they were “a little more inappropriate than usual.” Shortly thereafter, she was doxxed, her bank account was compromised by microtransactions, and she began receiving threatening tweets from disposable Twitter accounts while at work.

“My studio is surrounded by glass—it’s right in the city center area—and people started tweeting at me pictures of the back of my head,” Guth told The Daily Dot in a phone interview. “And then very graphic and sexual rape and death threats started happening. My parents’ address, my childhood home, and lots of other very personal information was being tweeted to me while I was on the air. And I like to think that I’m pretty tough, but it bothered me. I felt hunted.”

Guth is tired of the online harassment that she has experienced and that countless other women regularly endure, either as media creators or simply denizens of the Internet. Now, the longtime radio host is fighting back by producing a documentary webseries about women and online harassment.

Beyond her personal connection to the topic, Guth explained that she was mobilized to take action due to her work as a mentor for the The Op-Ed Project, an organization which helps train women leaders to participate in public dialogues. She lamented:

“I started to see really highly credentialed people—mostly women, but not entirely—opting out of the public conversation. It’s one thing to have opposition. That’s fine, and that’s expected. But when people would raise their voices for a very important cause and be met with threats of physical violence or racism or sexism, it would be hurtful and sometimes very scary for them, and they would opt out. That’s a problem, because then what’s left are the people who are controlling the public conversation are the loudest, not necessarily the smartest or the people with the most important things to say.”

Once a niche issue primarily discussed and experienced by the online feminist community, sexist abuse has reached a new level within the public consciousness in the past year. Designers and video producers (turned activists) like Brianna Wu and Anita Sarkeesian have received death threats for their vocal criticism of Gamergate. Celebrities like Jennifer Lawrence have had their private photos shared with the masses without their consent. And just last month, supermodel Chrissy Teigen made headlines for taking a break from Twitter after trolls responded to her critique of U.S. gun culture with misogynistic harassment.

But this issue is hardly exclusive to celebrities and public figures. A majority of Internet users have experienced some type of harassment online and a disproportionately high number of women—particularly young women—experience it in its most extreme forms. Last year, Pew Research reported that 26 percent of women ages 18 to 24 are victims of online stalking, while 25 percent of women in that age group have been sexually harassed online. For some, these experiences are traumatizing, leading Guth to conclude that online harassment has become a public health epidemic.

“When you start seeing suicides and diagnoses of PTSD, you’ve got a crisis on your hands,” she told The Daily Dot.

In addition to the docu-series itself, Guth will release behind-the-scenes content and publishing educational resources, and she aims to be transparent about the harassment that she and the project are receiving. “It took 16 minutes for the [Kickstarter] campaign to be live for someone to harass me,” said Guth. “It was something to the effect of ‘Shut this down, or I’ll shut you down.’ And I’m like, ‘Bring it.’ I’m not afraid of it. If we’re afraid, we can’t fix it.”

Although Guth has already reached her Kickstarter’s initial goal, there are two stretch goals she is striving to meet: raising $77,500 will allow her to travel throughout the U.S. to conduct interviews in a greater number of diverse communities, while raising $112,000 will allow her to travel internationally and document the forms of online harassment that occur globally.

Once the series launches in late spring of 2016, Guth hopes that it will be seen by the widest possible audience and hopes that legislators and law enforcement will be engaged by the series so that they can learn how to better help those targeted by harassment. “While there’s people in law enforcement at certain levels doing a lot of very, very intelligent and brilliant work in the online space, that’s usually not the first person you talk to if you go to report something,” she explained.

To read project updates or to help Guth reach one of her fundraising stretch goals, visit the campaign on Kickstarter this week.