Women are sharing their abortion stories in massive online speakout

Wendy Davis and others are participating.

Abortion is not uncommon. Roughly one in three women in the United States will terminate a pregnancy before the age of 45. Yet despite how many women have chosen to end an unintended or unwanted pregnancy, most stories about abortion remain hidden. Who are these women? What are their stories? And what can we learn from them?

This afternoon, Advocates for Youth‘s 1 in 3 Campaign will bring dozens of abortion stories to light during its second annual 1 in 3 Abortion Speakout. The livestreamed event will allow over 100 women from across the U.S. to share their personal abortion stories to an estimated 15,000 viewers.

Speakers will include high-profile names, such as comedian Lizz Winstead, Cecile Richards from Planned Parenthood Federation of America, and former Texas Sen. Wendy Davis, as well as activists and other young women. 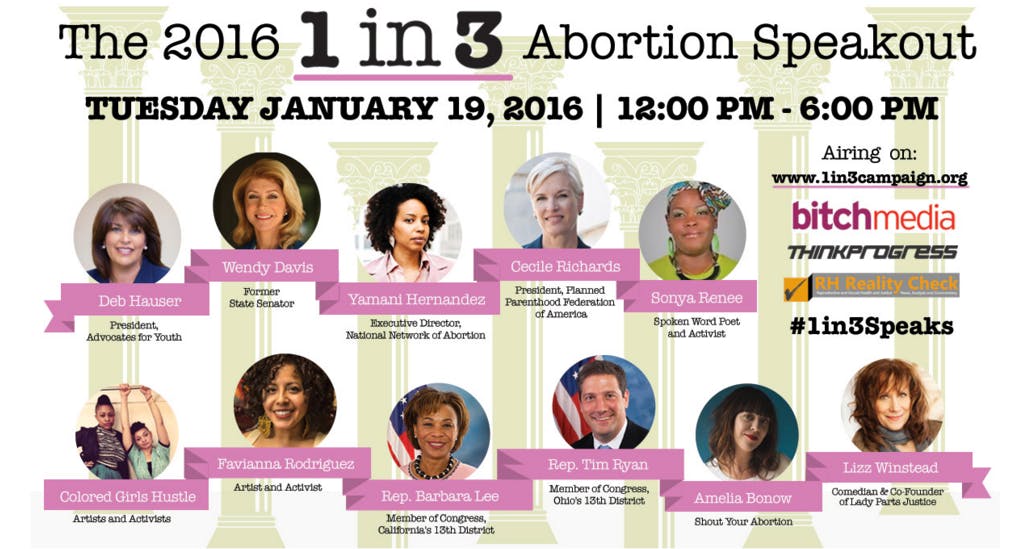 Advocates for Youth is an organization committed to championing youth access to comprehensive sexual health information, resources, and services. The 1 in 3 Campaign’s speakout is one such vehicle for advancing an overall mission to reduce stigma about reproductive choice—and it’s one that could not have arrived at a more important political moment.

Jan. 22 marks the 43rd anniversary of the landmark Roe v. Wade decision. Currently, the Supreme Court is preparing to hear Whole Women’s Health v. Cole, which many believe is the most important abortion case in decades. The outcome of the case may overturn the burdensome restrictions that have been placed upon women in Texas as a result of H.B. 2, and the ruling will have far-reaching effects on state abortion regulations nationwide. Opening arguments for Whole Woman’s Health v. Cole are scheduled to begin on March 2.

With the case fast approaching, the 1 in 3 Campaign did not want to delay in holding this year’s speakout, said Julia Reticker-Flynn, Advocates for Youth’s Director of Youth Organizing & Mobilization, in an interview with the Daily Dot. “We thought it was really important that we create an opportunity for people to share their stories publicly and for the general public and the Supreme Court to hear those stories,” she explained.

Reticker-Flynn is one of the primary organizers of the speakout and she believes that the event is a powerful opportunity for women who have had abortions to fight stigma and change hearts and minds with their stories. “Silence and the stigma [have] created such a harsh environment for people to speak openly about their experiences and vocally support abortion,” she continued. “We hope that, through creating avenues like the speakout, people will be able to find venues where they can share their stories and be welcomed with a culture of empathy and support.”

The accessibility of the livestream is a great asset for listeners, particularly those who don’t know where they stand on abortion regulations, Reticker-Flynn added. “It also allows people to tune in for a few minutes and listen… [I]t’s an entry point for people across the country to tune in,” she said.

Given the viral success of recent hashtags like #ShoutYourAbortion and #DearDebbie, both of which generated necessary conversations about abortion and reproductive justice, the 1 in 3 Campaign’s speakout can be seen as yet another way for women to mobilize online, build community, and participate in political dialogue.

For some, the appeal of the speakout is the delicate balance of its accessibility and its distance. Rachel Barnes, a reproductive justice activist based in West Virginia who will be sharing her abortion story this year, told the Daily Dot that it makes a huge difference when one is sharing their story remotely.

“It’s harder to tell in person, because you never know the gut reaction of the person you’re telling it to,” said Barnes. “It’s easier to tell people on the phone or online than it is to do it right in front of somebody.”

For others, the speakout is all about strengthening community. Renee Bracey Sherman, the Policy Representative for the National Network of Abortion Funds, will be one of the moderators at this year’s speakout. She also spoke at the first speakout and explained to the Daily Dot that, despite the isolation associated with staring at a computer screen, “You never actually feel very alone.”

The rapid speed of online dialogue is one of the other benefits of Internet-based events like the Speakout. After Bracey Sherman shared her story at the first speakout, she logged on to Twitter and was instantly welcomed by warm and supportive feedback.

"We have to fight like hell so people can live their lives free of shame and stigma." – @RBraceySherman #1in3Speaks Amen!

Mucho amor para @RBraceySherman Thank you for creating space for all of us with your words! #1in3Speaks

“That, to me, is really the point of the speakout: to bring people together,” she said. “It always just feels really wonderful to put your story out into the world and then get so much love and support back.”

The 1 in 3 Abortion Speakout will be livestreamed from noon to 6:00pm EST today on 1 in 3 Campaign, Bitch Media, ThinkProgress, and RH Reality Check. You can also follow along by checking out #1in3speaks on Twitter.