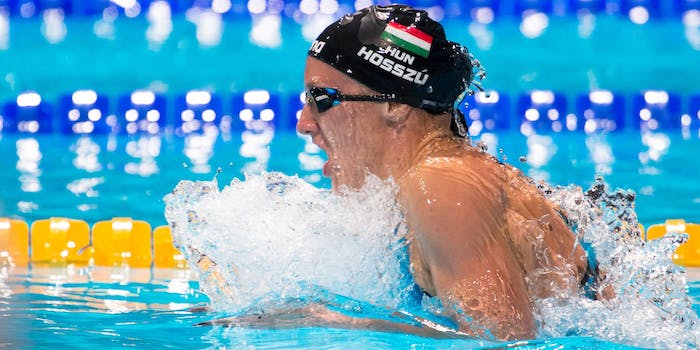 Not, you know, the woman who swam the damn thing.

Hungarian swimmer Katinka Hosszu set the world record last night in the 400-meter individual medley, and won an Olympic gold medal for it. However, as soon as it happened, NBC cut to Hosszu’s husband and coach, and named him “the person responsible for her performance.” Which seems… wrong.

Hearing these commentators give all the credit for Hosszu's win to her husband like pic.twitter.com/Lpfq09R8B2

Newsflash: it was Hosszu in the pool. It was Hosszu who smashed a world record. But her husband is the one responsible for it? That's sexist

No @nbc commentator that man is not "responsible" for Hosszù's world record. She is. He's her coach and partner. She broke that record.

According to USA Today, Hosszu has had a long journey to the Olympics. “She had captured nine medals—including five golds—at the world championships but never won an Olympic medal.” But her relationship with her husband and coach, Shane Tusup, has been a troubled one. In a profile from the New York Times, it’s clear Tusup has had a huge influence on Hosszu’s career, but colleagues also spoke of abusive behavior from Tusup.

Obviously coaches, and spouses, provide support and, well, coaching for any athlete. But to immediately credit a man in Hosszu’s life for her victory instead of her really comes off as sexist. So to settle the score, how about we start crediting all the male victories to women now?