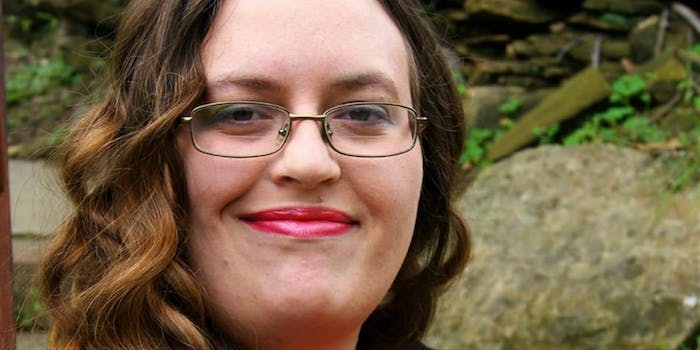 The Oklahoma State Legislature went through a special election this year to fill seven seats between the Oklahoma House and Senate. Four out of those seven went to Democratic candidates, following a larger national trend. But of particular note is Oklahoma Senate District 37, which flipped hard from Trump-supporting to electing an out-and-married lesbian.

Serving as the third openly LGBTQ lawmaker in the Oklahoma State Legislature, Allison Ikley-Freeman works as a mental health counselor by day. This is her first time running for political office, and she ran with just $200,00 as her campaign budget, Tulsa World reports.

The race was a close one, too: Though voting was done last Tuesday, the margin between Ikley-Freeman and Republican Brian O’Hara was so narrow—less than 1 percent—that the election wasn’t determined until a week later.

“We knew it wasn’t an easy win,” Ikley-Freeman explained to Tulsa World. “But I wasn’t looking for an easy win. I was looking for something that could be done with hard work.”

Photos may not be our strong suit in the middle of the night but fortunately sign blitzing is! Thanks to all the volunteers, including those not pictured here. An awesome team! #Ally4OK #ElectionDay

Ikley-Freeman decided to run after former Sen. Dan Newberry (R) resigned from his post in June. Newberry wasn’t exactly an LGBTQ activist, either. He previously expressed support for “Christian conservative values,” saying that “traditional marriages and families must be defended” according to his official site. And District 37 voted for Trump back in 2016; in fact, the whole state turned out for the president. So Ikley-Freeman’s election is a big shift for the state.

“When we were knocking on doors, so many people said, ‘Thank you. We didn’t know there was an election,'” Ikley-Freeman explained to Tulsa World.

Ikley-Freeman’s role in the Senate is more important than ever. Earlier this year, an Oklahoma Senate bill previously vowed to strip LGBTQ protections statewide, and an Oklahoma Capitol official belittled visiting LGBTQ students by calling them “cross-dressers.” Ikley-Freeman’s incoming presence is certainly a good sign for the future.