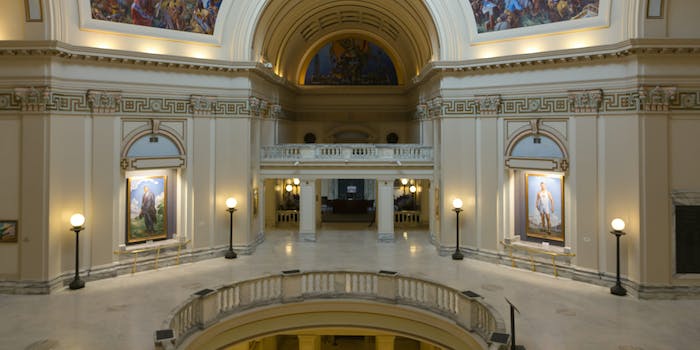 Staffer warns of ‘cross-dressers’ in Capitol when LGBTQ kids visit

The 'warning' email made queer kids sound like criminals.

When high school students with Oklahomans for Equality met with Oklahoma’s state representatives on Monday afternoon, they planned to talk about LGBTQ concerns affecting queer teens. But it soon surfaced that an email with the subject “Ladies Restroom” had been sent around the Capitol in Oklahoma City, warning that “cross-dressers” were visiting. And now, LGBTQ activists across the country are upset.

“Be aware that there are cross-dressers in the building, and you can use private bathrooms if you need to,” the House’s internship Page Program supervisor, Karen Kipgen, wrote in the email. “As per the Speaker’s office, Pages are being allowed access to the ladies restroom across from 401, for today. Again, there are cross-dressers in the building.”

Toby Jenkins, Oklahomans for Equality’s director, visited House Speaker Charles McCall’s office to complain about its need to warn officials that LGTBQ youth would be using their restrooms. A Facebook Live recording shows one staffer taking Jenkins’ complaint half-seriously, despite the fact that Jenkins insists the high school visitors “feel like they have been insulted.”

At the Capitol MUST WATCH!!!

Posted by Oklahomans for Equality on Monday, April 10, 2017

According to the Daily Beast, the restroom email was not officially vetted by House Speaker McCall or his staff; instead, Kipgen simply sent out the email warning without further confirmation. In an official statement sent to the Daily Beast, McCall distanced himself from the insensitive email.

“The email was not authorized by me, my staff or my office,” McCall explained. “It was sent unilaterally by a House staff member without any input or permission. I was unaware that such an email was being sent, and the remarks contained in the email are not condoned by me or the Office of the Speaker.”

Aside from mistakenly, insultingly calling all trans people “cross-dressers” (a transgender person’s gender doesn’t align with their sex assigned at birth; it is not merely a man walking around in heels and dresses), the email speaks to anti-LGBTQ bathroom anxiety. Such panic is an ongoing tactic targeting queer and trans citizens, portraying them as sexual predators invading straight, cisgender men and women’s privacy.

In Virginia, one lawmaker explicitly told a transgender man not to use the bathroom in the Capitol. And panic has even reached the Supreme Court. Before being sworn in, Justice Neil Gorsuch suggested “safety concerns” as valid reasons to discriminate against trans people accessing public facilities.