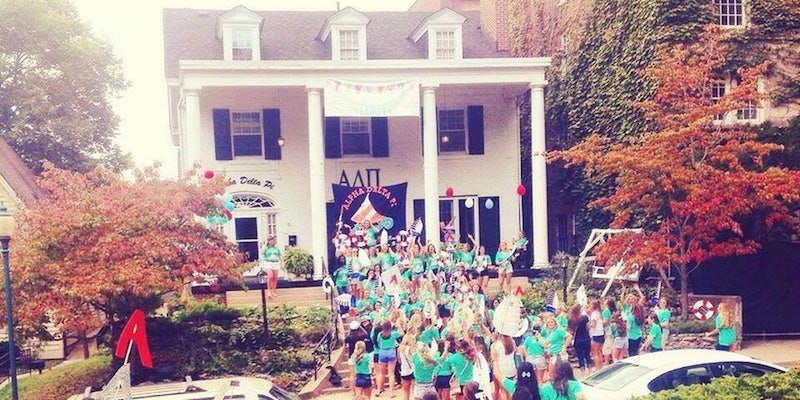 It's unclear who was saying the actual chant.

An Ohio University Greek organization is in the spotlight once again, and this time it’s a sorority. A video shared on Twitter Wednesday night shows a group of men shouting a sexually explicit chant outside the Alpha Delta Pi house. Now there are many questions swirling about the circumstances.

The video was taken by Olivia Hitchcock, an OU senior and copy chief at the campus newspaper, The Post. According to her Twitter account, Hitchcock was across the street from the ADPi house when she heard the chant and decided to film it.

"Send nudes, don't let me down. Take my soft dick and make it harder." – fraternity brothers singing to sorority pic.twitter.com/60khMIJOs2

Video was shot on my way from @AldenLibrary. I heard the entire song while standing on the upset of the street from the house.

Hitchcock posted the video Wednesday night, and it was shared by The Post later that evening. On Ohio University spokesman told the Daily Dot via email “The University is aware and is looking further into this matter.”

It’s unclear who the men in the video are. Some have assumed that they’re members of a fraternity, but on Twitter Hitchcock said she didn’t know if they were affiliated with Greek life.

Some fellow students replied to the video saying things like, “I have no words” and “I’m in shock,” while another brushed off the incident, saying “boys will be boys.” And another tweeted “maybe post about the increase of sexual assault on OU campus not something that is clearly a joke. its a serenade. its funny.”

This is not the first time this school year that questionable sexual conduct has been a topic of conversation. A Twitter account called “OU Against Harassment” was started by OU sophomore Rachel Baker to create a supportive place for survivors. There was also a controversial pamphlet passed out at the beginning of the semester warning students about the “blue house” associated with the Acacia fraternity. The pamphlet stated the men there are “NOTORIOUS FOR DRUGGING THEIR FREE DRINKS AND RAPING GIRLS,” and to beware.

In an opinion piece on The Post last week by student columnist Erin Davoran, she wrote about the university’s failure to combat sexual assault. By her count, there have been 12 reports this fall of sexual assault, and the OU Survivor Advocacy Program, a resource for student survivors, has not been operational since the program coordinator stepped down.

Davoran had some harsh words for her school: “Ohio University: you keep saying you care about survivors. But actions (and inactions) speak louder than words. I don’t believe your words.”

ADPi at OU and Olivia Hancock were not able to be reached for comment.

A university spokeswoman confirmed to the Daily Dot that the men shouting the lewd chant were affiliated with Greek life—specifically the Acacia fraternity, the same organization connected to the notorious “blue house.” Here’s the official statement:

“The University is aware of the video posted to Twitter on the evening of Oct. 28.  A preliminary investigation has produced information linking the behavior to Acacia, a registered fraternity at Ohio University.  Acacia has been issued a directive to immediately cease and desist all organizational activity while the investigation is ongoing.”

Acacia’s national headquarters provided an official statement to the Daily Dot regarding the situation at OU.

Acacia Fraternity headquarters is aware of the allegations concerning the chapter of Acacia at Ohio University, and is fully in support of an investigation into the matter. Our staff is in communication with the university administration, and will collaborate with them in resolving the matter.

Chapters of Acacia Fraternity are expected to extol our values. We do not condone the actions captured in the video. It is clear the men in this case did not exercise good judgment or uphold Acacia’s standards.

Acacia headquarters has begun its own investigation as well and is prepared to take appropriate disciplinary action. We have no further comment pending further investigation.