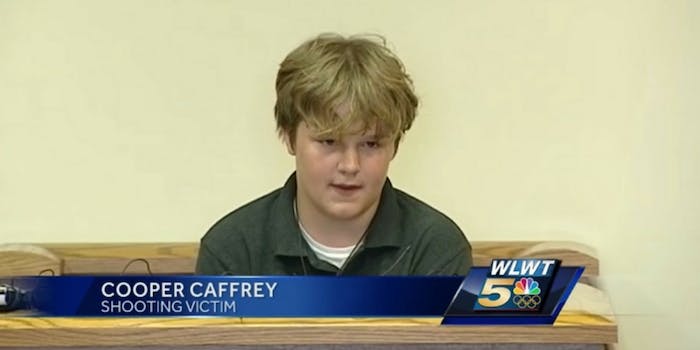 He was punished by the same school in which he was shot.

An Ohio school shooting survivor has received detention for taking part in the national school walkouts against gun violence in schools.

According to the Cincinnati Enquirer, Madison High School sophomore Cooper Caffrey and 42 of his classmates were punished for their protest.

Two years prior, in February 2016, Caffrey had been shot during a school shooting carried out by someone who he thought was his friend, 14-year-old Austin Hancock. Caffrey and one other student were injured. Caffrey testified at his friend’s sentencing and forgave him in open court in 2016.

A spokesperson for the school said the school’s student council met with administrators several times before the national walkout. Students wanted to show a unified response to the Parkland shooting that wouldn’t “be seen as advocating for gun control legislation,” since the community is mostly Republican, and thought a walkout wouldn’t be the solution. Instead, they agreed to wear the school colors of Marjory Stoneman Douglas High School and stickers.

On the day of the walkout, Caffrey hadn’t planned to protest. But upon being told during announcements that students who protested would be punished, he became upset. So later that morning, he walked out with 42 other students before they were corralled near the side of the school, as administrators worried the front of the building was “too dangerous.” They ended their 17 minutes outside, one minute for every student and teacher killed in Parkland, with prayer.

At a school board meeting earlier this week, all of the school board members agreed that the students should be punished, with the board president stating students owed the school resource officer an apology. Caffrey, who had attended the meeting with his dad, reportedly later told him that listening to the board president “‘was like being shot all over again’…Back on the cold floor, looking for help.”

Writing on Facebook, Caffrey’s father, Marty, said he’s grateful for how school officials helped his son after the shooting and understands the punishment.

“The whole purpose of a walkout is to protest against an establishment,” he wrote on Facebook. “I do not expect the establishment to support the walkout.”