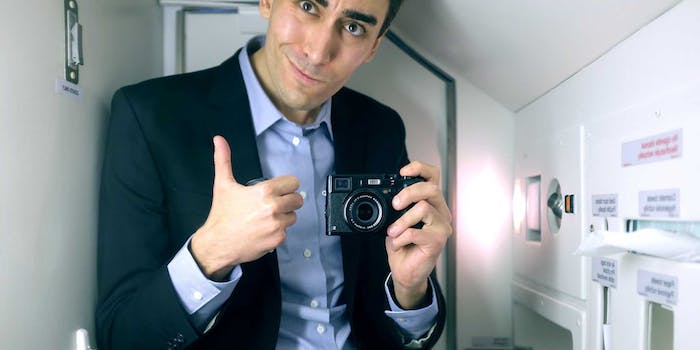 How to introduce your date to your online footprint

Dustin and I were introduced through a mutual friend in a dimly lit Brooklyn bar one night in December 2013. Because people are rarely formally set up anymore, I was a bit uncomfortable with it. It felt old-fashioned, like I was supposed to curtsy or wear a corsage.

Our friend left us to talk among ourselves and we chatted about working in media until he had to leave for another party. Just like that, he was gone. There was a very real possibility that I’d never see him again.

But a few hours later, a notification popped up on my iPhone lock screen letting me know that he’d friended me on Facebook. “Interesting,” I thought, mentally stroking my chin. “Very interesting.”

We started messaging each other, and a few weeks later, we made a date to have drinks. We went out a few more times, but ended up just becoming friends. Recently, I asked him what it was like to interact with me online after we’d originally met IRL.

“Shit, based on those messages I dropped you a line on Facebook the day after we met!” he said after looking back at our history. All these months later, it hardly matters what happened when, but there was still that awareness of being so eager online following a real-life introduction.

So often now, we first meet our dates online, and the stress comes from how we should act when we finally meet in person. But the flip side can be just as complicated. Our online personae are just as much a representation of who were are as our laugh or the way we part our hair.

When it comes to introducing a potential suitor to our online selves, is it a choreographed dance or an all-out freestyle?

Gordon, the founder of the content platform Femsplain, has a large internet presence, so it’s not surprising her view on this issue is more liberal. But what about those who don’t view their web lives and their personal lives as interchangeable?

“I wait until it comes up naturally,” Mary Ann, 30, said of the point where offline interactions go online. “For example, I’ve had situations when I’ve been added to Gchat during the second week of knowing someone because they prefer to Gchat over texting during the day.”

Chris, 31, lives by a simple but hard and fast rule: Never Gchat.

“It’s worse than text because it essentially deflates everything you’d otherwise have built up to talk about on the phone/in-person. It helps kill the mystery,” he said.

Sara, 27, told me that she can’t remember who first friended who in her current relationship, but she doesn’t think it should be a big deal. After all, it’s just the internet.

“Wait until you are in a more comfortable place with this new romance before taking the plunge.”

“It can be an awkward thing (‘OMG, are we not Facebook friends?!?’) So I think maybe [it’s better to] wait until you are in a more comfortable place with this new romance before taking the plunge,” she said. “Coming on too strong can come across as aggressive in a bad way, and what’s the rush?”

In some ways, there does seem to be a rush to connect with someone online after meeting IRL. Instead of trusting our guts and believing we just met someone awesome and new, we turn to our phones as soon as they’re out of our line of sight to see if they have any mutual friends who can provide juicy nuggets of insight to their past, or check out their Instagram to see if it’s super basic. We judge people by the content of their online character, which weighs just as heavily, if not more so, than what we saw of them a few minutes ago, before our very eyes.

Sometimes, even meeting someone in person once or twice isn’t enough of a reason to send a Facebook request, or follow them on Twitter. Brad Gerick, 27, likes to wait it out, so he can avoid ruining things by rushing.

“I don’t friend or add anyone unless they do it first. If they initiate, I’ll accept,” he says. “Not because I’m any better than them, but because I would rather play it safe than freak them out.”

Gerick is the director of social media at the New York Daily News, so he’s pretty good at tracking people down on the internet. But he thinks that just because you can find someone’s social presence, doesn’t mean you should. “I can find anyone online because I do it all day for my job, so I don’t have a good sense what’s socially acceptable online stalking outside of the newsroom.”

Should other people view your social media presence as an extension of who you really are?

These questions about online dating etiquette prompt another inevitable question: What if your online persona is, for lack of a better word, intense? What if you tweet a few hundred times a day, or have thousands of Instagram followers? Does your online persona need to be presented with a disclaimer? Should it be taken with a grain of salt, or should other people view it as an extension of who you actually are?

My Daily Dot colleague Selena Larson thought about this recently after meeting a guy who piqued her interest.

“I started thinking about what my online profile would look like if he decided to look me up. The first thing I thought of was Instagram, because we already followed each other on Twitter, and my public Instagram feed is a window into my life in a way that Twitter isn’t,” she told me.

When you look through this window, you see selfies. A lot of them. This made Selena somewhat hesitant to add the guy on Instagram. She eventually did, but not without reservations.

“In a world where selfies are sometimes synonymous with inflated egos, I decided to assure him that although my Instagram account had quite a few photos of my face, I really was not that self-centered,” she told me.

While Selena was hesitant to introduce a potential romantic prospect to her online presence, others think that people can either take them as they are online, or leave them. The consensus seems to be, in the immortal words of Popeye, “I yam what I yam.”

“Never apologize for or explain your online persona.”

“Never apologize for or explain your online persona—it’s how you share yourself with your friends and the world,” Chris said. “That shouldn’t be compromised or explained away to anyone.”

Martin feels that women in particular feel the need to qualify the way they present themselves on social media.

“As women, we need to stop apologizing for ourselves,” she said. “If you don’t like or ‘get’ my online personality, then there’s a good chance you won’t get me either.”