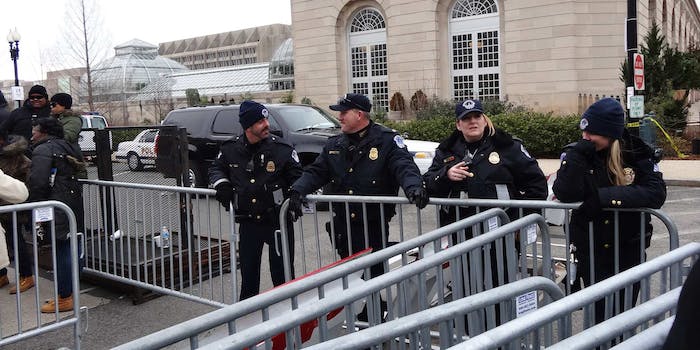 At a time of increased demands for transparency and an ongoing global debate about the government surveillance, the Obama administration is warning police forces across the U.S. to remain silent about spying technologies, the Associated Press reports.

American police have an increasingly wide range of technologies at their disposal for the monitoring of cell phones and tracking of suspects, including Stingray, which intercepts and tracks cellphones by masquerading as part of the network—bypassing the need for law enforcement to deal with the cellphone networks directly. But thanks to recent efforts by the U.S. Department of Justice (DOJ), any attempts to discover exactly how you’re being surveilled by the police is going to be an uphill struggle.

The AP reports that for “security reasons,” the government is now routinely intervening in criminal cases and public record requests, blocking the release of information and seizing relevant records pertaining to them.

“Interviews, court records and public-record requests” seen by the AP allegedly show that the Obama administration is actively requesting law enforcement agencies withhold certain information about the technologies. This is even the case in states that have public record laws, under which the details requested should nominally be eligible for public release. When the AP reached out to request access to public records concerning the surveillance equipment, multiple state law enforcement agencies declined to disclose “what devices they purchased, how much they cost and with whom they shared information,” or else released “heavily censored purchasing” documents.

These actions are defended in one instance by FBI special agent Bradley Morrison, who in a affidavit relating to the Tucson Police Department argued that any such disclosure would “result in the FBI’s inability to protect the public from terrorism and other criminal activity because through public disclosures, this technology has been rendered essentially useless for future investigations.”

Detractors, however, maintain that the national security argument is being used to hide from the public the extent to which they are being—potentially unconstitutionally—surveilled. “These extreme secrecy efforts are in relation to very controversial, local government surveillance practices using highly invasive technology. … If public participation means anything, people should have the facts about what the government is doing to them,” said American Civil Liberties Union attorney Freed Wessler.

The U.K government has also evaded questions about the technology it employs: Prior to revelations in 2012 by WikiLeaks that Britain was indeed using TrapWire surveillance software, the government refused to say whether it employed the technology—or even what it was capable of.

The AP’s report comes in the light of whistleblower Edward Snowden’s explosive revelations about the extent of the U.S. government surveillance apparatus. Reforms—of varying significance—have been promised, but it’s fast becoming clear that, despite arguments for the necessity of mass surveillance, its implementers are highly reluctant to let it face public scrutiny.