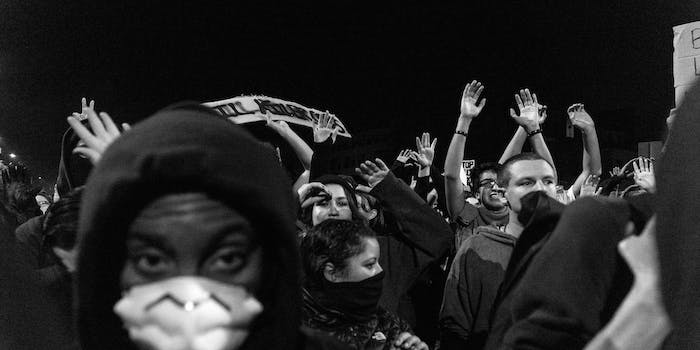 Photo by Annette Bernhardt/Flickr (CC BY 2.0)

As many as 30 arrests reported as the protest continues.

Thousands more lined sidewalks and marched throughout the city in solidarity with demonstrations in Baltimore. Many held signs calling for justice in the case of Freddie Gray, whose death in the custody of Baltimore police last week has provoked daily protests and on Monday a riot.

Video and photographs of arrests quickly filled the hashtag #NYC2Baltimore on Twitter as the New York Police Department grabbed people on the street and off sidewalks. Among those arrested was a Vice News reporter, according to photographer Jenna Pope.

The protest at Union Square was initially peaceful, but as protesters began marching west they were confronted by NYPD officers in riot gear. Police officials had reportedly warned protest organizers that disruptions to traffic would not be tolerated.

Wednesday night’s protest was organized by Millions March NYC, the group who in December drew between 20,000 and 50,000 people and temporarily shut down the Brooklyn Bridge in a protest related to the choking death of Eric Garner at the hands of the police.

A @vicenews photographer was just arrested. Had to grab his camera off the ground. #NYC2Baltimore #FreddieGray

Traffic is at a complete stop along much of 7th Ave right now. #NYC2Baltimore #FreddieGray pic.twitter.com/6UHAdFa1qN

At press time, as many as 30 protesters were in police custody according to online reports from journalists at the scene of the demonstration. The crowd chanted “the whole world is watching” as the arrested were loaded into police vans.

Photo via Annette Bernhardt/Flickr (CC BY 2.0)