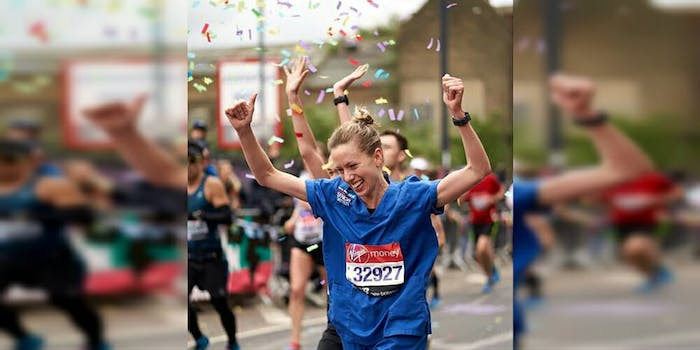 Guinness World Records says a nurse’s uniform is a dress.

Nurses are speaking out on social media after one of their own was denied the world record for the fastest marathon time by a nurse in uniform—because she wore scrubs instead of a dress.

According to the BBC, while preparing for the London Marathon, Jessica Anderson, a senior nurse at the Royal London Hospital, realized that her personal best time was remarkably close to the world record for the fastest marathon run by a nurse in uniform. Anderson contacted Guinness World Records to let them know she would be attempting to challenge the record and sent them a photo of her outfit—blue scrubs—so they could track her progress through the marathon. When she heard back from an official at Guinness World Records, they told her the uniform did not fit their criteria.

“For the purposes of this record, the nurse’s uniform must include: a blue or white nurse dress, a white pinafore apron, a traditional white nurse’s cap. Tights are optional,” the official reportedly said to Anderson.

She ran the marathon on April 28 and beat the previous world record by 22 seconds, but was told that because she wore scrubs, it didn’t count. She challenged their criteria as outdated and sexist, pointing out that the vast majority of nurses she works with also wear scrubs. Nurses on social media have come to Anderson’s defense as well, showing what they wear to work with the hashtag #WhatNursesWear.

My uniform (tunic&trousers) vs what I wore on a community placement. At my university a dress isn’t an option! I prefer tunic and trousers personally but no matter what I wear I am still a student nurse. pic.twitter.com/7X3Ye7KLCT

In response to the social media campaign, Guinness World Records announced that they will be reviewing the policy. “Guinness World Records takes the matters of equality and inclusiveness very seriously,” wrote Samantha Fay, vice-president of Guinness World Records, in a statement. “I want to ensure all concerned that we have recognised the need for an immediate review of this attempt and the fastest marathon dressed as a nurse category and associated guidelines which we will begin as a priority.”

A silver lining: Anderson has used her participation in the marathon to raise money for the charity fund for her hospital, and the exposure has caused the fundraising goal to be surpassed by over 900 percent.