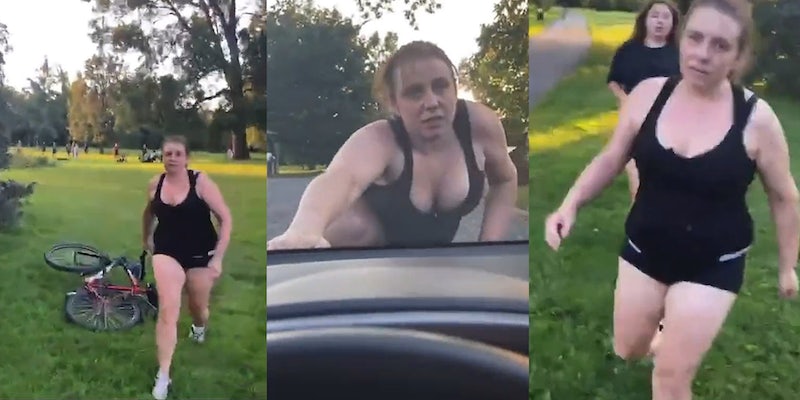 ‘I have never experienced a white mob chasing me and it’s the scariest thing that’s ever happened to me’: Woman allegedly assaulted by another woman for not wearing a bra

'This makes me physically ill.'

An Indigenous Ottawa-based woman has gone viral after posting a video showing a dispute between herself and another woman. According to poster Laura (@lauragee77), the dispute originally began after the woman featured in the video chastised her for not wearing a bra.

“Yesterday evening I was attacked by a white woman who was upset I was wearing no bra,” Laura wrote in a post attached to the video. “I have never experienced a white mob chasing me and it’s the scariest thing that’s ever happened to me in my life. Please be safe out there.”

At present, the video, an Instagram live stream later shared on Twitter, has been viewed over 2.1 million times.

In the video, one can hear Laura accusing the woman of body-shaming her. This seems to provoke the woman, who appears to assault Laura.

The video cuts out for a moment. When it returns, Laura can be heard explaining why she was filming the woman who appeared to assault her. Someone then yells at her to stop filming.

From there, the woman returns, knocking the phone out of Laura’s hands. The dispute continues for a few moments before Laura eventually picks up her phone and escapes, telling the people around her that she is returning to her car.

However, it seems that the people around her misunderstood the situation and believed that Laura had stolen the woman’s phone. This is not the case, as Laura’s phone seems to be the phone in question and was being used to record the video before the time of the accusation. The alleged assailant also appears to confirm that Laura did not steal her phone later in the video, screaming, “Can I have her phone?” in reference to Laura’s phone.

Police eventually arrived to investigate the incident, per Ottawa Citizen.

“The 37-year-old suspect, whose name was not released, was served a notice to appear [in] court, where she will be formally charged with assault and mischief,” writes author Aedan Helmer of the suspected assailant visible in the video.

“Police said they had reached out to the victim and offered support. The file has also been reviewed by the Ottawa Police Service Hate and Bias Crime Unit, but police said Friday no hate-related charges had yet been filed,” the article continues.

“This makes me physically ill,” one user wrote. “The fact that nobody came to your aid, but in fact joined in with the mob makes me ashamed to be Canadian.”

“Horrific racist violence,” another added. “If Ottawa police wants us to believe that they are addressing systemic racism in the force one thing they can do prove this to the public, is to start taking hate crimes like this seriously & demonstrate that racist abusers will be arrested & charged.”

In response to the support, Laura made a post thanking users for their kind words, continuing with a thread about her experience as an Indigenous woman in Canada.

“First of all, I want to say how overwhelmed and grateful I am to have received the love, support and kindness from strangers around the world,” a section reads. “As an Indigenous woman, I embody the messages of survivorship through autonomy and sovereignty over my body every day.”

“I choose not to fixate on the negativity and hope that these people will one day honour themselves by creating a safer world for all of us and for our future generations,” a further tweet from Laura reads. “The hyper-sexualization, aggressive jealousy and violence towards us is despicable for Canada.”

The Daily Dot reached out to Laura via email.