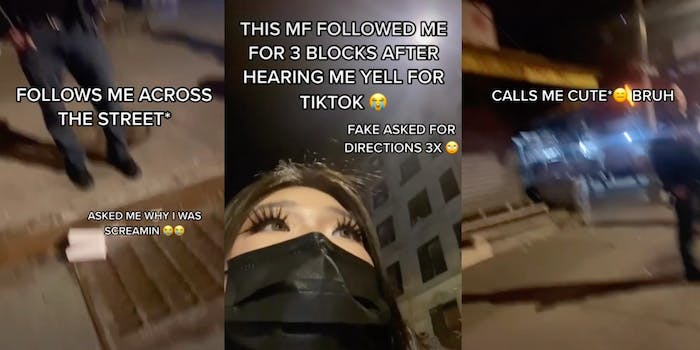 'I don't know if you all saw him. This motherf*cker followed me for three blocks.'

A popular TikTok user is stirring conversation online after filming a man who purportedly followed her for three blocks in New York.

The video, uploaded last week by Nina Mc Lin, begins with the man repeatedly asking whether she’s OK after hearing her yelling.

Lin, who boasts more than 1.6 million followers under the username @n.nina666, says the man overstayed his welcome by asking for directions three separate times before eventually asking for her name.

Despite attempting to end the conversation and walk away, the man continued to pursue Lin and follow her across the street.

Lin again attempts to explain that she was not in distress but merely yelling for a video. The TikTok user also claims that the man smelled heavily of alcohol.

After telling the man to “stay safe” in yet another attempt to end contact with the man, Lin is once again asked for directions.

Lin adds that as she continued to walk away, the man, clearly ignoring her desire to be left alone, opted to call her “cute.”

Even after ending the conversation, Lin says the man stood and stared at her from the street corner as she walked two blocks away.

“I don’t know if you all saw him,” Lin says to her followers. “This motherfucker followed me for three blocks.”

The footage immediately spurred many of Lin’s female users to recount times in which they were followed as well.

Other urged Lin, who is known for filming on the streets of New York City late at night, to go home.

“DUDE the ONLY times I’ve been followed was when I lived in NYC and it happened FAR too often,” @somecallmebug added.

Despite posting on TikTok for the first time in May 2020, Lin’s follower count has exploded over the past several months. But Lin is not without controversy. The TikTok star apologized in January after it was revealed that she had previously used the N-word on social media.