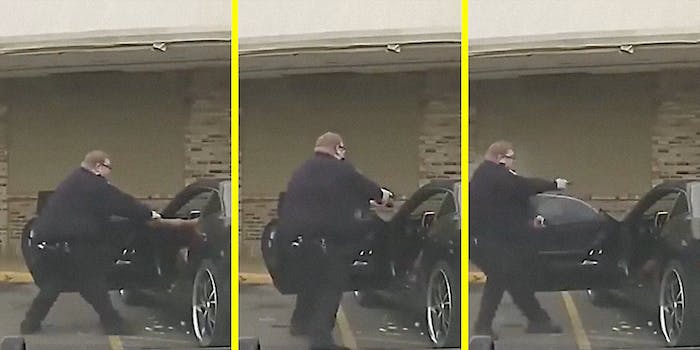 She fled the scene and died in an accident.

A video has emerged showing a woman firing multiple shots at a Tennessee officer in response to him tasing her, before she fled the scene and died in an accident, according to the Tennessean.

The woman, who has been identified as Nika Holbert, 31, crashed into a bush and a ditch after she fled the scene in Nashville, Tennessee on Friday. She had apparently been shot after the two exchanged gunfire.

Police bodycam footage shows Nashville officer Josh Baker approaching Holbert after a traffic stop, who is smoking and is on the phone in a parking lot that is seemingly empty, except for the car she will soon get into.

The video begins with Holbert lighting a cigarette, as Baker says, “Here, do me a favor.” A glimpse of a pair of handcuffs is seen in the camera.

“No, no, don’t put me in handcuffs. I haven’t done anything wrong,” Holbert says, inching backward towards the car.

She then grabs her bag that was resting on the trunk of the car and begins running around the car.

“Hey, get down, get down on the ground!” Baker says, running after her, while she repeatedly screams “no” and gets into the car.

“Get down on the ground!” Baker says, as she’s holed up on the driver’s seat in the car.

He then begins tasing her, and she screams repeatedly, “Help me, help me!”

She leans toward her right and Baker then starts screaming, “Ma’m, put the gun down!”

She then begin shooting at him; the Daily Dot noted at least five shots being fired.

As Baker lies on the ground and calls for help, Holbert gets back into the car and drives off, with its driver’s seat door still open.

According to the Tennessean, once she drove off, she crashed her car and died once she was taken to the hospital.

Baker initially approached Holbert after he identified her car as belonging to one Demond M. Buchanan, who is tied to six outstanding warrants on drug-related charges. Holbert wasn’t authorized to drive the vehicle, according to police spokesperson Don Aaron.

Baker then identified marijuana and white powder in possession of Holbert, and asked her to hand over the bag to him.

The person on the phone with Holbert was her mother, according to the Tennessean.

The incident is being investigated by the Tennessee Bureau of Investigation, Metro Nashville Community Oversight.

Baker was in stable condition as of Friday evening.

On the Twitter thread where the video was posted, people shared different opinions on the incident:

“Come on people, U know we can’t defend this,” wrote one user. “Driving a know drug dealers car, in possession of drugs, running after being caught denying U did anything wrong! The shooting was justified & the tasering wouldn’t have happen had she admitted she was caught. We can’t keep doing this.”

“He used a taser on her first. That was poor judgment. He escalated the situation,” wrote another user.

“Frankly my take is that any cop that has to use extreme force in a situation like this shouldn’t be a cop,” wrote one user, defending the woman. “He had so many other options. Cops that resort to attacking a so-called suspect prematurely are unintelligent cowards. Their job is to de-escalate.”