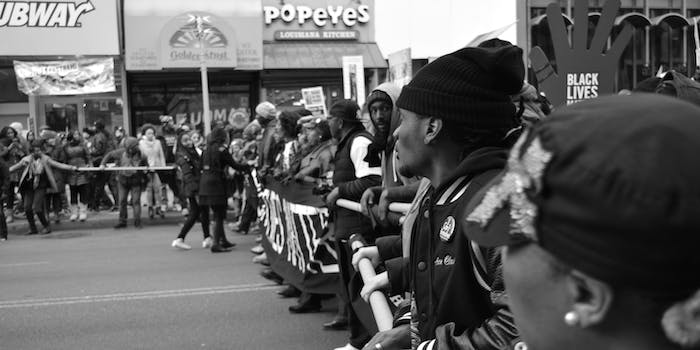 The lawsuit against Clarkstown Police Department was filed by Black Lives Matter Global Network’s Rockland County chapter over the summer and alleges that the police spied on members’ social media presence throughout 2015. According to police reports provided by the chapter’s attorney and obtained by Mother Jones, Clarkstown’s Strategic Intelligence Unit spied on activists’ Twitter and Instagram accounts, collecting information on how posts were shared and what the content entailed. The lawsuit claims that the police’s surveillance violated the activists’ constitutional rights through racial profiling and cracking down on their right to freedom of speech.

“Defendants illegally targeted members of Black Lives Matter for surveillance based upon their race and critical commentary of the treatment of people of color by police,” the chapter’s lawsuit claims, according to the New York Law Journal. “These illegal actions are borne out of the unwarranted anxiety that the Black Lives Matter movement causes mainstream society.”

The alleged surveillance was done using a geofence, or a tracking software that monitors social media content within a given area. In this case, reports suggest police targeted “high-risk areas” in Rockland. The Strategic Intelligence Unit allegedly tracked activists’ social media content to “interrupt violence,” and police reportedly chose to track “individuals who may be associated with acts of violence.”

“I mentioned before, you really should not have Black Lives Matter listed as a target of surveillance,” Modafferi told Cole-Hatchard in an alleged email exchange, Mother Jones reports.

It remains unclear if the police’s activities are legal or not, too. ACLU of Northern California attorney Chris Conley claims the issue draws American’s constitutional rights into law, as it’s hard to tell if law enforcement can legally monitor and download social media data for later law enforcement usage.

“You are collecting lots of information that is publicly available—is that a problem?” Conley told Mother Jones. “I don’t think there would be any question that an officer sitting at a laptop and going to Twitter and digging around on things would be constitutional. The question is, does it change when it goes from individual manual investigations to bulk surveillance?”

Meanwhile, University of San Francisco Law School professor Susan Freiwald is concerned by Clarkstown police’s activities. She fears police surveillance on social media could lead to long-term departmental tracking, letting law enforcement spy on every single activist that comes out to protest for Black Lives Matter and other movements.

“Basically, police would be able to investigate the people who are running the protest and the people who are participating, keep a file on them, and keep tabs on who’s involved,” Freiwald explained to Mother Jones. “And that’s not what police are supposed to be doing.”

The legal lines between police and the movement continue to be blurry. Last month, after a police officer sued Black Lives Matter and activist DeRay Mckesson, a federal judge ruled that the movement cannot be sued because it isn’t a legal entity. As Black Lives Matter continues to expose racism against the Black community by police, tensions will likely remain contentious between local law enforcement and activists.