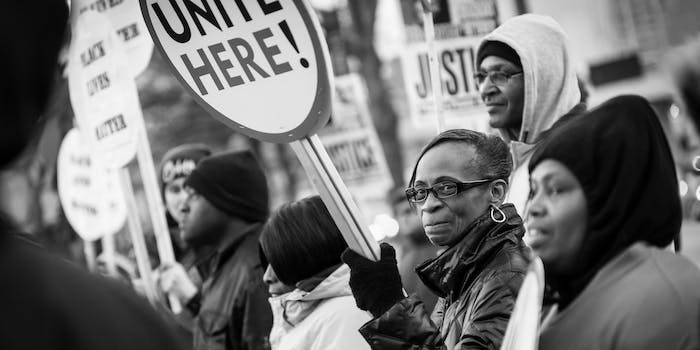 It is not an entity capable of being sued.

Planning on suing Black Lives Matter on accusations of “inciting violence”? It’s not possible, a federal judge just ruled, saying the group cannot be sued because no such “entity” exists.

On Thursday, U.S. District Judge Brian Jackson ruled that, like the Tea Party or the civil rights movement, Black Lives Matter is a social movement, and therefore isn’t an entity capable of being sued, according to the Associated Press.

Jackson’s ruling responded to a suit filed against Black Lives Matter and Baltimore-based activist DeRay Mckesson by an anonymous police officer who was injured by a rock thrown during a protest in Baton Rouge last year. The protest came in response to the police-involved shooting of Alton Sterling, who was Black, by a white police officer.

Mckesson was one of nearly 200 protesters arrested during that protest. The local district attorney declined to prosecute Mckesson and nearly 100 protesters charged with obstructing a highway. Mckesson and others have sued Baton Rouge and law enforcement in response, accusing them of excessive force and violating constitutional rights.

While the anonymous officer involved in the suit didn’t accuse Mckesson of throwing the rock, he and attorney, Donna Grodner, alleged Mckesson and the movement “incited the violence” and were “in charge of the protest” in which the officer was injured. As a result of his ruling, the judge dismissed the officer’s suit.

“Although many entities have utilized the phrase ‘black lives matter’ in their titles or business designations, ‘Black Lives Matter’ itself is not an entity of any sort,” Jackson wrote in the ruling. He also said the officer’s claim showed that Mckesson “solely engaged in protected speech.”

I just got the good news that one of the lawsuits against me from an anonymous Baton Rouge Police Officer was just dismissed by the judge.

“It’s clear that I did nothing wrong that day and that the police were the only violent people in the streets,” Mckesson told the AP. “The movement began as a call to end violence and that call remains the same today.”