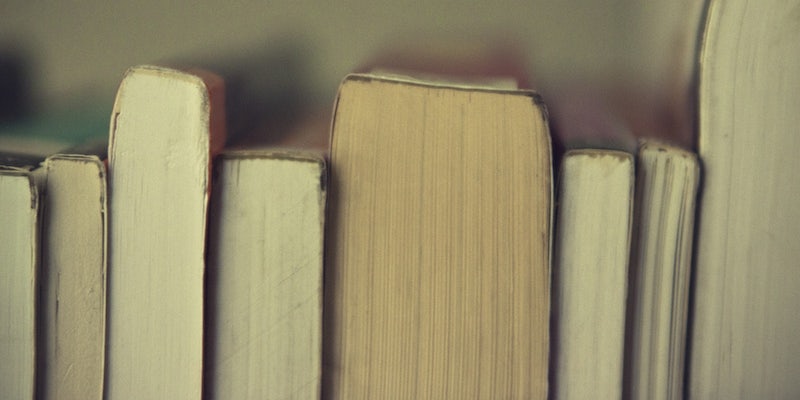 First there was a disturbing essay—and then things just got worse.

Yesterday, the bubble of Twitter where New York’s media and publishing dweebs hang out fairly imploded under the weight of an 11,000-word rant.

The author, Edward Champion, was unfamiliar to most—he’s mainly known as a grouchy book blogger—but the name sent a chill down the spines of those who already knew him.

Champion’s essay, “Emily Gould, Literary Narcissism, and the Middling Millennials,” is immediately remarkable for its misogynist lens: he charges “white women who are almost totally in the dark about their privilege, many bolstering a blinkered neoliberal feminism” with assaulting the very foundation of literature (as he understands it).

Emily Gould, a perfectly ordinary author who is somehow always the lightning rod for these inside-baseball outbursts, came in for rank, grotesque abuse over any number of perceived slights and outrages. It was rather ugly.

Bad reviews, sure. Mean blog posts, yes. Comments, par for course. Reference to my head being shoved up my “slimy passage,” not ok

When Rusty Foster linked to the disturbing tract in his Today in Tabs newsletter, he expressed the fear that people would try to “substantively engage” with it. “I am here pleading with you to resist that temptation,” he wrote. “In fact let’s, officially, starting right now, pretend Ed Champion never existed. Ready: Go.”

That mixture of acknowledgment and dismissiveness characterized the flood of subtweets mocking the histrionic piece.

Anyhow an important lesson to be drawn from this is never write 11,000 words on anything for free.

Don’t mistake a loud fart in the dark for literary criticism.

i don’t think i want to read anything written by men about female writers again. maybe not ever.

Put down the snapchat and pick up the Proust! You’re on my lawn! The lawn of important literature! They don’t have a twitter for that!

“It’s so funny how Internet drama revolves around the same four people.” – Not me

Champion himself, in tweets since deleted, claimed he had received death threats and other unwanted attentions from readers—and that’s when this tiny, odd, incestuous literary scene was thrown into another sort of turmoil.

After a few self-pitying comments, Champion early yesterday evening tweeted his intention to commit suicide: “No money, no job, no gigs, no agent (a MS out with three). Not good enough. So I’m going to throw myself off a bridge now. No joke. Goodbye.” 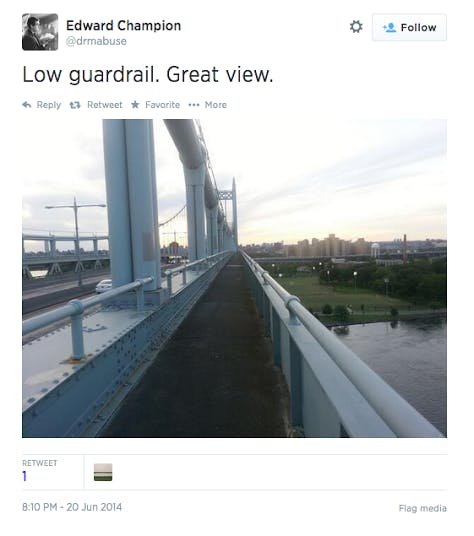 It did not seem an idle threat, and observers responded swiftly. Some sent Champion their phone numbers; others said that people cared for him, trying to trigger second thoughts.

Choire Sicha, a writer and editor glancingly mentioned in Champion’s screed, attempted to go talk him down in person, but nobody answered the buzzer at the home address he was given.

Champion’s partner, the journalist Sarah Weinman, demanded that he get in touch immediately. Then she lashed out at the community that dared to push back against Champion’s vituperative attacks, sparking a tiff with Sicha, who certainly wasn’t going to abide such finger-pointing.

@drmabuse you had really better call me dammit

You are all responsible.

@Choire thank you for your lecture. I have more pressing matters to attend to.

The drama leveled off somewhat when Champion tweeted again, indicating a change of heart.

Gould, who has continued to offer and retweet measured commentary on the whole fiasco, did seem to reach a breaking point in a post that soon enough disappeared: “You know what’s a really cool way to desperately last-ditch try to get people back on your side?” she asked. “Emptily threaten to off yourself.”

As the night wore on into morning, the participants in this emotionally grueling affair stepped back to take in a fuller picture of what had happened.

By this same guy, but thought speaking out would make it worse. I don’t know what to do with that.

Regardless of your opinions or theories or whatever, I think we should all stop mocking Edward Champion, who is unwell & may need help.

At least one colleague tried to resuscitate Champion’s reputation as a critic, arguing that his obsessions are what make him an invaluable fraud-buster in the publishing industry.

Of course, Champion’s latest effort has nothing to do with plagiarism or fact-bending in non-fiction: it’s a manifesto about mediocrity, and it betrays his gender-infused anxiety about being, in fact, worse than average—a failure. It was this blazing insecurity that his sharp-eyed peers picked up on and exploited, as it appeared to feed a hostile, egotistical pretension.

Bummer for him he didn’t sell it as a Kindle Single; those hate-reads add up.

Still, the furious chatter about sexism, success, and suicide gave pause to a social media clique often inclined to view the Internet as no more than an advanced language game. They played with semantics and subtweets all day, but at some point, most were forced to confront a reality rarely addressed: the people on either side of any controversy, no matter how niche, do exist, with pains and fears that are shockingly easy to devalue or disregard.

Let’s all try to do better, shall we?