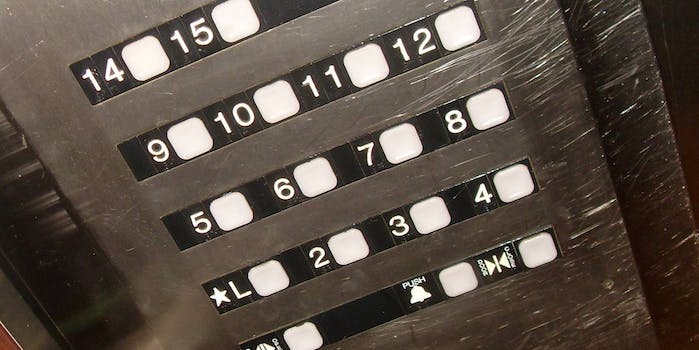 Photo via Bob B. Brown/Flickr

Trapped in an elevator? Don’t move.

A new ad campaign run by the New York City Department of Buildings encourages city dwellers to remain calm and to stay put if trapped in a stalled elevator instead of trying to make an escape.

Of the five deaths and 51 injuries that resulted from 56 elevator accidents across the city last year, the most gruesome came from attempts by trapped individuals to save themselves.

As a result, Department of Buildings Commissioner Rick Chandler is launching on Wednesday a citywide “Stay Safe. Stay Put” public awareness campaign with the hope of encouraging elevator passengers to remain inside stalled cars.

“It’s horrible and something the mayor is very concerned about,” Chandler told the New York Daily News.

The new ad campaign will be run in print, bus shelter ads, and radio spots to get the safety message out to the public. A new video briefs commuters on staying inside the elevator in the event of an emergency, which is the safest place to be.

In a city of 71,000 elevators ridden by millions of New Yorkers every day, incidents are rare. However, this often leads to a false sense of security and risk-taking when an accident does occur, said Chandler.

“While elevators are safe, you still have to use common sense,” urged the new PSA video.

Elevator horror stories within the last year include a man who was killed after trying to escape from a stuck elevator that began moving, as well as a man who suffered a fatal head injury after it was pinned between the elevator roof and building floor while trying to escape the car.

So what do you do if the elevator becomes stuck? According to the video, you should “just ring the alarm, relax, and wait; help is on the way.”

And what about the possibility of a free fall? Never fear. After all, there is more than one brake keeping the car on track, and the elevator is not going to plunge the ground.

“That is just not going to happen,” said Chandler. “My experts here have never heard of a case of that happening.”