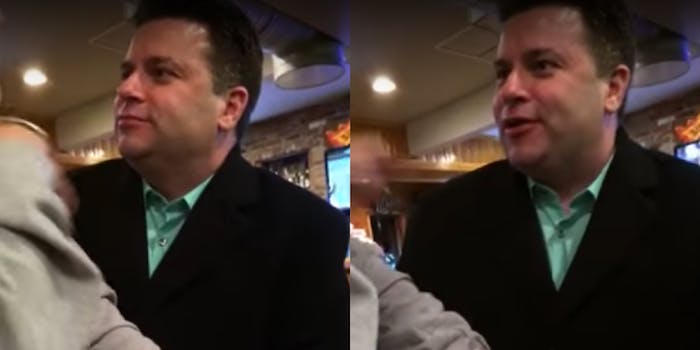 He's not backin' down!

Some men just don’t know when to quit—not even when they’re videotaped maybe drunkenly telling a woman she should fuck them.

GOP New Jersey Assembly candidate Brian McDowell is facing backlash after a 10-second video of him telling a friend that she should have sex with him has gone viral, most notably from the Cape May County Republicans, who have pulled their endorsement of McDowell, POLITICO reported.

McDowell is running for a  seat in the 1st Legislative District, which includes Cape May.

“The GOP is very supportive of women and women’s rights. We have three women who have been elected as freeholders, several women constitutional officers,” Cape May County GOP Chairman Mark Karavan told POLITICO. “Supporting women and women’s groups is one of our core values. You can do the math.”

In the video, McDowell appears intoxicated and tells an anonymous woman, someone he later revealed to be his friend, “Let me tell you right now. You should fuck me. It would really be good. Listen, you never know.”

But despite losing the support, McDowell isn’t backing out of the race. In an attempt to explain the weakness of man, he compared himself to Jesus. Jesus.

“There are human errors and even Jesus dropped the cross three times,” McDowell told POLITICO. “I’m not running to be the Pope. I’m running to make New Jersey more affordable.”

McDowell also insisted that he wasn’t drunk—he’s just a confidant dude who thinks women want to fuck him!

“Yes, I had a couple of drinks but it also shows the confidence that I have in a room. And I believe in life most people enjoy confidence,” McDowell said.

(Un)ironically enough, McDowell, a real estate broker, was also a contestant on the third season of The Apprentice and coordinated President Donald Trump‘s 2016 campaign in Cape May County. Last year, leaked audio recordings from a decade prior revealed Trump bragging about being able to sexually assault women and grab them by their genitals because of his fame.

McDowell, who was fired in the second episode of his Apprentice season, told Business Insider in November that he had “potentially damaging” audio of Trump from his time on the show. He originally didn’t release the footage because he wanted the former reality TV show host to win the election. But now, McDowell says he’s planning on auctioning off the recording in the future.

“My mother passed away from lung cancer,” he said. “Eventually I will auction off my uncut, unfiltered Apprentice audio that was sought after during the [president’s] election and donate 100 percent of the proceeds to cancer research.”