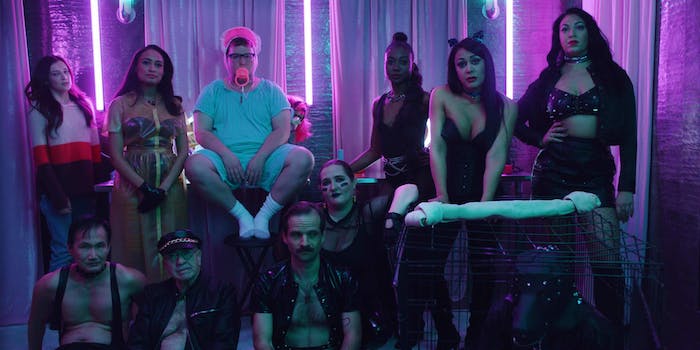 I wasn’t sure what to write or post today. It’s a very overwhelming and wonderful thing to be seen and heard this way. So I decided to show you the letter I wrote to critics when we were trying to get them to look at Bonding in a sea of competitive content. I hope this illuminates where I and the show are coming from. There are too many people to thank, so I’ll do it off the damn internet. But I just wanted to say thank you for watching. This is a dream come true.

The series also drew criticism from sex workers who said the show offers a narrow, reductive, and stigmatized representation of their work, not to mention a supremely unoriginal premise: a white sex worker dom-ing her way through grad school. People turn to sex work for a variety of reasons, and sometimes that includes paying college tuition, but “stripping through college” and other related clichés are tired at best. At worst, this premise and others like it suggest that sex work is only valid or acceptable when used as a temporary stepping stone, or a brief stop on the way to a “real” career.

Portraying a white woman’s brief foray into pro-domming as a fun adventure, while choosing to skip over the reality of sex work stigma, undermines the validity of their work and the threats to sex workers’ safety and well-being under the anti-trafficking law FOSTA-SESTA. “FOSTA/SESTA is literally killing people,” Megara Furie tweeted. “And here you are, @netflix, hand out, collecting cash while workers are jailed, evicted, killed. Shame on you.”

Kate D’Adamo, a sex worker advocate with Reframe Health and Justice, told me this type of narrow representation also reveals a dangerous disregard for sex workers’ basic humanity. “When every sex worker you see in media is either in handcuffs or a body bag, you internalize that and you stop expecting more. You don’t employ harm reduction techniques, because you don’t know it’s even a possibility,” D’Adamo said. “It also shapes how people treat you—either with suspicion, fascination, or abject fear—but never with humanity, because sex workers are rarely shown as human.”

For D’Adamo, the key to respectful, affirming, and humanizing media representation is simple: talk to sex workers. In a recent Twitter thread, D’Adamo asked her followers to share their favorite fictionalized representations of sex workers, and many responses mentioned the Hulu series Harlots and HBO’s The Deuce.  “The best sex worker representation is what resonates with sex workers, and the people in your lives who trade sex,” D’Adamo said. “If you’re keen on consuming media about those folks, find those people in your world and ask how it feels. If it hurts them, stop and ask for what does resonate.”

Getting sex work right doesn’t mean fudging the details for views or skimping on the fact-finding because you think no one will notice. It means seeking out those marginalized voices and listening to sex workers when they tell their own stories. It isn’t complicated; it’s about compassion.