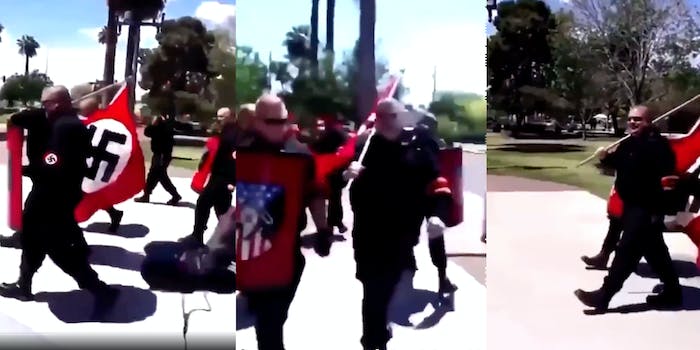 The leader of one of the oldest white supremacist groups in the United States was arrested Monday after marching through Chandler, Arizona, shouting racist slurs and threatening to shoot a Black man and his friends.

Burt Colucci, commander of the National Socialist Movement, was caught on video parading through the Phoenix suburb with approximately 15 other neo-Nazis. In the video, shared on Twitter by Fifty Shades of Whey (@davenewworld_2), all of the men are decked out in Nazi paraphernalia, including Swastika armbands and shields adorned with the group’s symbols. Colucci leads the procession, carrying a Nazi flag attached to a pole and shouting racist slurs at passersby.

In the video, which also topped the r/PublicFreakout subreddit this morning, members of the group ask the person filming, “What are you fucking [N-word]s gonna do now?” One of them also chants into a megaphone, “Hi-ho, [N-word]s gotta go.”

The neo-Nazis hurl more racist insults at the person filming as they pass by him, with one marcher referring to him as a “fucking monkey” and a “chimp.”

Later in the day, Colucci was arrested for pulling a gun on several Black bystanders, Reuters reports. An altercation began after Colucci placed trash on a vehicle belonging to the Black bystanders and shouted racist slurs at them. The bystanders and one additional witness said Colucci then threatened a Black man with a loaded handgun.

In a police report reviewed by Reuters, Colucci claimed he only brought his handgun into a “low ready” position, but witnesses said Colucci aimed his gun at the Black man before threatening to kill him and his friends.

A Maricopa County superior court judge set Colucci’s bond at $7,500 on Tuesday. He is allowed to travel to his home state of Florida as long as he returns in time for his April 25 hearing. If convicted, Colucci could face at least three years in prison.

In an interview with Reuters, Colucci said he wants to encourage white people to “stand up for themselves” by, “for example, feeling free to shoot Black people who made them feel unsafe in public places.”

The National Socialist Movement’s mainstream presence has dwindled since group members participated in the deadly 2017 “Unite the Right” white supremacist rally in Charlottesville, Virginia. The organization is facing an ongoing federal lawsuit due to the rally, which led to the death of 32-year-old Heather Heyer, who was killed when 20-year-old James Alex Fields Jr. drove into a crowd of peaceful protesters.