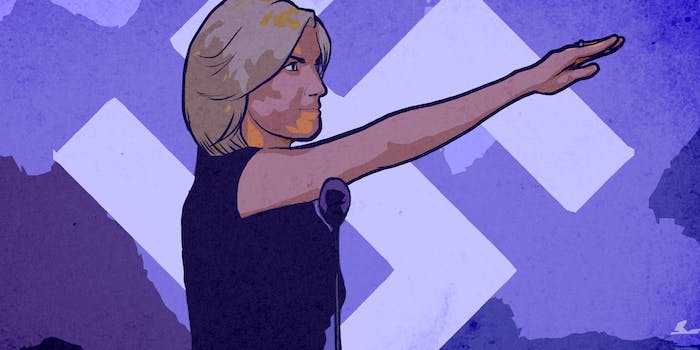 What do Nazis think of Laura Ingraham’s gesture at the RNC?

It may not have been a Nazi salute, but some white supremacists believe it was, nonetheless.

This article contains imagery that may be offensive or triggering to some readers.

Did Laura Ingraham, Fox News correspondent, really give a Nazi salute at the end of her speech at the RNC last night?

We can never be sure. Lots of people argue her stiff-armed gesture was just her waving to the crowd, and that you could catch just about anyone in that position at some point. Plenty of conservatives are pointing to the bru-ha-ha over Ingraham’s gesture as just liberal media attempting to smear Trump. In fact, that’s what Ingraham herself argues.

Nevertheless, some white supremacists are really excited. A number of Twitter users associated with white power and Nazi campaigns have taken Ingraham’s gesture as a sign of support and validation.

Twitter user @PinevilleMatt, who identifies as a “white separatist,” tweeted enthusiastically about Ingraham’s gesture, and believes it was intentional. “She knew what she was doing last night,” he told the Daily Dot. He also feels that “Trump’s nomination for president suggest how the silent majority feel.”

The most concrete proof of this is on Stormfront, everyone’s favorite white pride community. In a forum about the incident, users argue about Ingraham’s intent, but many are taking it as a Nazi salute.

Ingraham’s salute likely wouldn’t be as big of an issue if Trump didn’t have a history of dog-whistling to white supremacists. Earlier this year, he tweeted an anti-Semitic meme created by white nationalists on 8chan, and retweeted a Jeb Bush meme for Twitter user @WhiteGenocideTM. He is regularly finding support among white supremacists, especially because of his platform on banning Muslim entry to the United States.