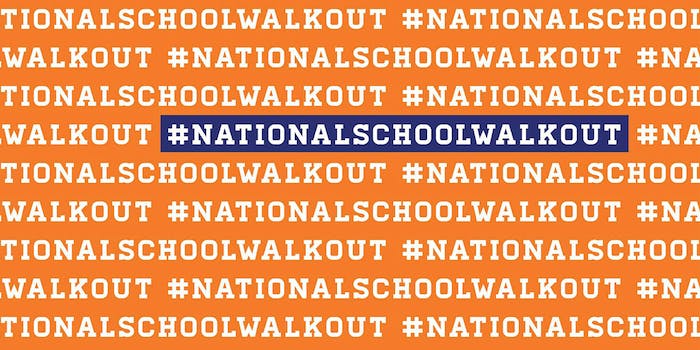 Protesters were already gathering nationwide when the school shooting occurred.

National School Walkout Day was created by 16-year-old Lane Murdoch, a sophomore at Connecticut’s Ridgefield High School. Developed alongside three other classmates, Murdoch wanted to create a protest in response to the Parkland high school shooting, which left 17 students dead after a former student opened fire on Feb. 14.

On 4/20 walkout at 9:50 @ 10:00 AM have a 1 min 13 sec moment of silence for those lost at Columbine #NationalWalkout #NationalSchoolWalkout pic.twitter.com/y9FZYrgQr5

Today’s protest calls for 13 seconds of silence for the 13 people killed during the Columbine High School shooting that took place 19 years ago today. Organizers have asked students to leave class for the entire day after their silence.

But as teens prepared to protest, another school shooting broke out, this time in Ocala, Florida. A Forest High student was shot in the ankle and is now in the hospital with non-life-threatening injuries; the shooter was arrested.

The news served as a dark reminder that school shootings feel more pervasive than ever in the U.S., even as teen activists vow to fight back against gun violence. Twitter users quickly turned to the hashtag #NationalSchoolWalkout in anger and frustration, warning that change is long overdue.

Today is the 19th Anniversary of the Columbine shooting. Today our kids across the US walked out of class to mark that anniversary. Today was another shooting at Forest High School in Ocala Fl. When will it end! #NationalSchoolWalkout pic.twitter.com/4FjU7m3UNz

while you were laughing as our brave students and staff spoke at our #NationalSchoolWalkout, a person was shot at a school in Florida. when will you realize that this is a serious problem. i am shocked https://t.co/5jpwGuecXg

during my school’s 17 minutes of silence, there was a school shooting in florida. one person is injured. god help us. #NationalSchoolWalkout

Protests continued across the nation as breaking news emerged. Teachers at Marjory Stoneman Douglas High School, where the Parkland shooting occurred, began protesting at 7am ET prior to the Forest High School shooting, with students quickly lining up by 8:50am.

LIVE: On the 19th anniversary of the #Columbine shooting, students at schools across the country plan walkouts to protest gun violence; They're already starting in #Parkland, FL where 17 people were killed in Feb. #LiveDesk pic.twitter.com/WpBWx2dIi1

The first students have walked out of Marjory Stoneman Douglas High School in Parkland, Florida. https://t.co/z0d2WAUB5A

Teens throughout the nation joined in by 10am local time with their own protests. While turnout seemed relatively smaller than last month at some schools, others took the day in stride and let their voices be heard.

COME OUT FOR THE WALK OUT! WE HAVE A PHOTO BOOTH, CHALK STATION, PAINT STATION, STATIONS ON BULLYING, MENTAL HEALTH, VOTING, AND INFORMATION ON RUNNING CANDIDATES! WALK OUT FOR SCHOOL SAFETY! pic.twitter.com/8nASDW6HE3

Wooster students gather for 13 minutes of silence at the flagpole as part of today’s walkout. #NationalSchoolWalkout #mindingwhatmatters pic.twitter.com/rg77M655xs

Young people have gathered in front of the White House. Not a sound, as names of gun violence victims are read aloud… #ENOUGH #NationalSchoolWalkout pic.twitter.com/z7u8hI9U6s

Not every protest went along seamlessly, however. The students of Marjory Stoneman Douglas High School were warned by Principal Ty Thompson that they would face disciplinary measures if they left school grounds, CNN reports. Meanwhile, Ocala’s Marion County canceled all of its walkouts after the Forest High School shooting.

School walkouts have been cancelled district-wide in Marion County, Florida, after a school shooting at Forest High School in Ocala, according to a school board member https://t.co/jAcmxUnMAc

Today my school was supposed to participate in the #NationalSchoolWalkout but instead we are sitting in a code red lockdown because a school in our county has gotten shot. All my prayers go to Forest High School🙏🙏 #NeverAgain #EnoughIsEnough

It’s #NationalSchoolWalkout and my school is on lock down because of school shooting at forest high school pic.twitter.com/ezyroqoA2k

If you’re participating in the #NationalSchoolWalkout today, know your rights. pic.twitter.com/YWL3pwFW3F

National School Walkout Day falls days after a Pew Research Center study revealed over half of all U.S. teens worry about school shootings. Their parents are equally concerned, with 63 percent fearing that a school shooting could occur on their child’s campus.