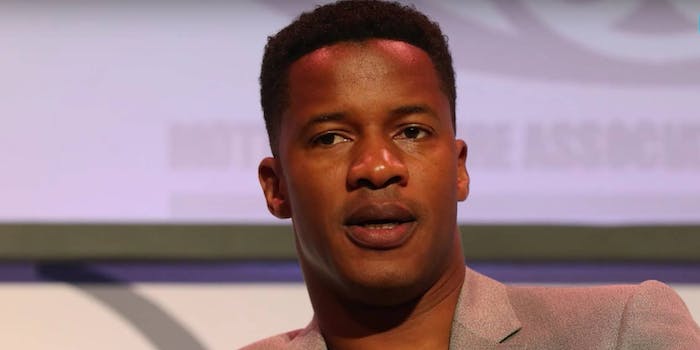 The 'Birth of a Nation' director speaks out after his initial comments were met with outrage.

Birth of a Nation director Nate Parker is speaking in-depth about consent and male privilege after he was on the receiving end of widespread internet backlash for his responses to resurfaced rape allegations from when he attended Penn State University as an undergrad.

Back in January, Parker’s film about Nat Turner’s 1831 slave rebellion made waves at Sundance Film Festival and was considered an early Oscar contender. It got picked up by Fox Searchlight, who purchased the film for a record $17.5 million.

While the allegations against Parker and Birth of a Nation co-writer Jean Celestin appeared online soon after, (and was on Parker’s Wikipedia page even then) they didn’t become well-known until August—just as Parker and Fox Searchlight were preparing to do press for the film ahead of its release.

Parker and Celestin were charged with raping a fellow classmate at Penn State in 1999, but Parker was acquitted by a jury and Celestin had an overturned conviction after he was initially found guilty. A civil suit later filed by the victim alleged that Parker and Celestin harassed her after she filed charges, taunted her, and had a private investigator follow her around campus. Her brother revealed that she took her own life in 2012.

A Facebook post from Parker addressing the resurfaced allegations and attempts at damage control drew criticism. Many felt that Parker hadn’t learned anything or even felt remorse in the years since he was acquitted of rape, implying that he made a statement about the alleged victim all about himself. The American Film Institute canceled a planned screening and Q&A with Parker, viewers previously looking forward to Birth of a Nation vowed not to see the film, and some Oscar voters have already decided not to watch it.

After a screening of Birth of a Nation at the Merge Summit in Los Angeles, Parker addressed his male privilege and consent head-on with the audience in an off-script moment and called his initial reaction to his resurfaced past “selfish.”

“This is happening for a very specific reason,” Parker said, according to EBONY. “To be honest, my privilege as a male, I never thought about it. I’m walking around daring someone to say something or do something that I define is racist or holding us back, but never really thinking about male culture and the destructive effect it’s having on our community.”

In a subsequent interview with EBONY, Parker elaborated on male culture and toxic masculinity and revealed that he never really had a conversation about consent—something that still doesn’t happen for many men today.

He admitted that his initial interviews about the rape case weren’t empathetic or contrite and he admitted to his male privilege for not having thought about the woman who accused him of rape in the 17 years since. Parker revealed that he’s sat his oldest daughter down for conversations on consent. Reaching back to yet another instance of backlash, he apologized for insensitive and homophobic comments he made in 2014.

In short, Parker says that he wants to be a leader and be an ally but is admits he’s still new to discussing gender.

“I’m a work in progress. I’m trying to be better,” Parker said. “I feel remorse for all the women that are survivors that felt I was being insensitive because I was. And I want to have a better understanding of how I can be more of an ally, if they’ll accept me. There will be people who won’t accept me, and that’s okay. All I can do is say that I stand for justice and really learn more about this issue so I can be a better ally of this issue.”

You can read Parker’s full interview at EBONY.