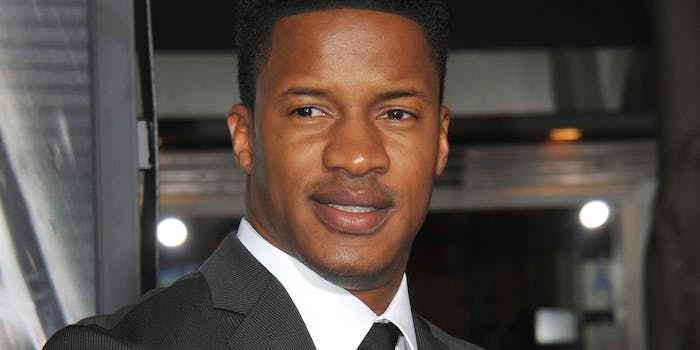 What is a socially responsible movie buff to do?

Is it OK to separate the moral flaws of an artist from the quality of their art? The answer is yes—so long as you understand the consequences.

It’s become an American trending topic that we can’t ignore across our Facebook feeds. When we find out that Mel Gibson said anti-Semitic things, and Michael Richards used the N-word, or that Johnny Depp is alleged to have beaten his wife, we’re naturally expected to chime in. Sometimes it’s an easy decision: Bill Cosby has been rightly turned into personae non grata following overwhelming evidence that he’s a serial rapist.

Then there is the complicated case of Nate Parker, who directed, wrote, produced, and starred in the new movie The Birth of a Nation.

Back when Parker was a 19-year-old undergraduate at Penn State, he and his roommate Jean Celestin (who co-wrote The Birth of a Nation with him) were accused of raping one of their fellow students. Although Parker was eventually acquitted of all charges and Celestin’s conviction was overturned on appeal, eyewitness testimony regarding the case, as well as Parker and Celestin’s own actions during the trial (such as harassing the alleged victim for months after she filed charges) raised suspicions that the two men were guilty. Their accuser committed suicide in 2012 after struggling with years of trauma.

On Monday, the American Film Institute canceled a screening of Parker’s film.

Complicated social politics are embedded in the Parker rape scandal. On one hand, we have the ongoing rape epidemic that plagues our college campuses, one that repeatedly makes headlines as case after case comes out of a rapist being let off the hook or given an unusually light sentence. At the same time, The Birth of a Nation tells an important, controversial story that needs to be spread to a wider audience—that of Nat Turner, a Virginia slave who led a violent rebellion in 1831. It’s a tale that Parker had to fight tooth and nail to put on the silver screen, despite documenting an important event in American history, because producers were concerned it would alienate white audiences.

These thorny gender and racial politics have sharply divided pundits in how they respond to the allegations against Parker. In an interview with the Root, the Rev. Al Sharpton claimed that the rape charges are only being resurrected now to discredit their movie’s political message, one that is particularly relevant in our era of racially charged presidential campaigns and officer-involved shootings. Similarly, two anonymous black directors confided to Variety that they find the timing of these news stories suspicious, with one pointing out that “this seems like a way to muffle a very important piece of work.”

By contrast, Slate television critic Willa Paskin has condemned Parker’s acquittal on the ground that “it seems to have boiled down to the fact that Parker and the woman had engaged in consensual oral sex the day before the incident—which sounds like the oldest smear in the ignore-a-rape-victim’s-testimony handbook.” Roxanne Gay went even further in a op-ed for the New York Times: “I cannot separate the art and the artist, just as I cannot separate my blackness and my continuing desire for more representation of the black experience in film from my womanhood, my feminism, my own history of sexual violence, my humanity.”

What is a socially responsible movie buff to do? We must first accept that our choices as consumers have consequences.

If Parker’s film becomes a success at the box office and wins awards, it will cement his place as an up-and-coming Hollywood giant. While this doesn’t legitimize any past sex crimes he may have committed, it will certainly count as yet another occasion in which a powerful man seems to be above accountability for wrongs, that there are reasons to believe he committed, against a woman’s body. If Parker’s movie fails because of these charges, it won’t just be unfair to a motion picture that may deserve better in terms of its artistic merits; it will send the message that the presumption of innocence until proven guilty doesn’t apply in the court of public opinion, with some arguing that this is particularly true when the accused is a person of color.

It may not seem fair for audiences to have to take these factors into consideration, but it’s the only morally responsible thing to do—especially for a film like The Birth of a Nation, which clearly promotes a pro-social justice message. Whether we like it or not, our choices as consumers establish social precedents that are followed long after individual works of art have faded into the background.

Alyssa Rosenberg of the Washington Post is wrong when she argues that “the only thing that determines whether ‘The Birth of a Nation’ is a truly great movie is what they put on screen.” It is possible to argue that the movie and its creator aren’t one and the same, but they are still inextricably linked.

We don’t have the right to dictate how others should make these choices. I’m certainly not doing so in this article.

Just as one’s opinion of an artwork’s merits is subjective, so too should each individual be allowed to decide for themselves where they draw the line in terms of how they’ll allow an artist’s personal character to impact their thoughts on the work itself. Or whether they choose to believe the claims against an artist in the first place. Our burden rests not in telling other people what is or is not the right thing to do, but simply making it clear that there are choices which must be made.