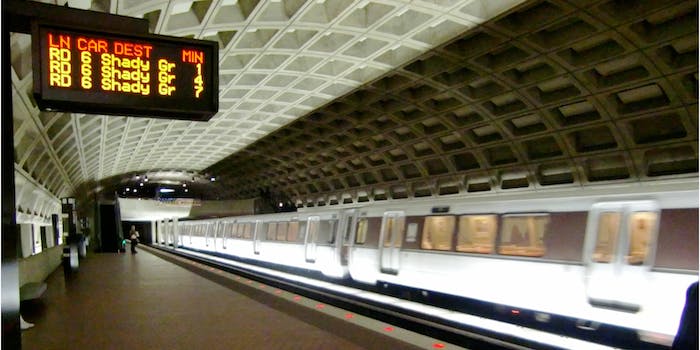 The author tweeted a photo of the Metro employee eating on the job.

An author may have to seek a new publisher for her upcoming novel after she reported a Washington, D.C. Metro employee on Twitter for eating in a uniform.

“When you’re on your morning commute & see @wmata employee in UNIFORM eating on the train,” Natasha Tynes wrote during her Friday morning commute, according to screenshots shared on Twitter. “I thought we were not allowed to eat on the train. This is unacceptable. Hope @wmata responds. When I asked the employee about this, her response was ‘worry about yourself.'”

Metrorail Info, an account for D.C. transit agency, promptly responded to her on Twitter, thanking her for helping ensure “all Metro employees are held accountable.”

Tynes, who is also a communications officer at World Bank’s IFC, then responded to the tweet with details about the timing and the route of the train.

But Twitter immediately called her out for publicly shaming a Black working class woman for grabbing a quick bite, with many commenting on the white privilege Tynes had in reporting her and for missing the power dynamics in the situation that allowed her do so:

“I ride the DC metro pretty frequently and I have eaten and drank on the train,” wrote user @JosephCianos. I’ve never been harassed or questioned about it, even though I know it’s ‘wrong’. That’s white priveledge [sic], folks.”

The act was about shaming and being better than, it had nothing to do with 'breaking the rules'.
It was about power and class identification.
I feel sorry for you, not knowing this.

You’re big tripping if you can’t have a little nuance and understand the working poor (which includes many black & brown ppl) shouldn’t have their livelihood threatened over eating a damn sandwich.

Tynes, who is Jordanian American, did receive support from some people who felt that a Metro employee, who enforces rules on the trains and platforms, should be held accountable:

No one is calling the employee out on her rude response. Commenters for whatever reason keep bringing up the color of the woman's skin. Irrelevant. Please do me no favors because of the color of MY skin. I don't need to be patronized. I can follow the rules and need no excuses.

She exposed a public servant who was violating the law at her work place. Being black is no excuse. Setting higher expectation is the way to go. Natasha is a minority woman who has been bullied by 1000s using profanities & threats.

While Tynes’ status as an immigrant woman itself became a part of the discussion, some also pointed out that there is racism towards Black women from other communities of color:

Tynes reportedly deleted the tweet and apologized later, but it was too late. “I apologize for a tweet I posted earlier today, which I have since deleted,” she wrote on Twitter, according to WUSA9. “I am truly sorry.” Her tweets weren’t accessible as of Sunday afternoon as her account has since been deleted.

By Friday evening, book publisher Rare Bird announced that it was canceling Tynes’ upcoming novel They Called Me Wyatt within its distribution network, saying that the writer “did something truly horrible.”

“Black women face a constant barrage of this kind of inappropriate behavior directed toward them and a constant policing of their bodies,” read the statement from Rare Bird. “We think this is unacceptable and have no desire to be involved with anyone who thinks it’s acceptable to jeopardize a person’s safety and employment in this way.”

A word from us on what happened this morning with Natasha Tynes in DC. pic.twitter.com/gJY4lZLFUQ

Most people lauded the swift action taken by Rare Bird, marking it as an example of how people should be held accountable for their prejudices:

Ha!! My exact response. Did not expect to read outright clear and concise support like that. Like not at all. 😳

We as Black Women are put through enough obstacles on a daily basis. A woman eating because she provably didn't have time to eat before leaving for work resonates with many of us.

I just love Black Twitter. They will save us in 2019… pic.twitter.com/taTM0ePJ3J

Thank you for acknowledging why this truly angered and upset so many people. No one wants Tynes to fail; but we all must be invested to supporting each other and not tearing each down, especially WOC.

But not everyone was on board. Some Twitter uses noted that Black teens have been arrested in the past for eating at the station, and that same standard should apply to Metro employees.

But mainly, Rare Bird’s decision got a warm welcome, with many hopping over to its website to buy the publisher’s books or support its authors:

Currently searching your catalog for something to buy…hmmm

I'm grateful for this response, impressed by your wisdom, and shopping your catalog imminently.

Just bought Dragonglass Bowl by Catherine Thibeaux after perusing your offerings. Thank you for taking a stand against bigotry. Will look at more of your authors in the future.

Thank you. I will be looking to add your other writers to my reading list.

Tynes’ novel was set to be published on June 11 by California Coldblood, an imprint of Rare Bird. The publisher announced on Twitter that it was “halting all shipments from the warehouse and postponing the book’s publication date.”

It’s not clear how the transit agency is addressing the situation with the employee in question. As many noted in their responses, it’s common to see many eating on the subway, even if it might be against the rules. Metro did not immediately respond to the Daily Dot’s questions about what steps they are taking.