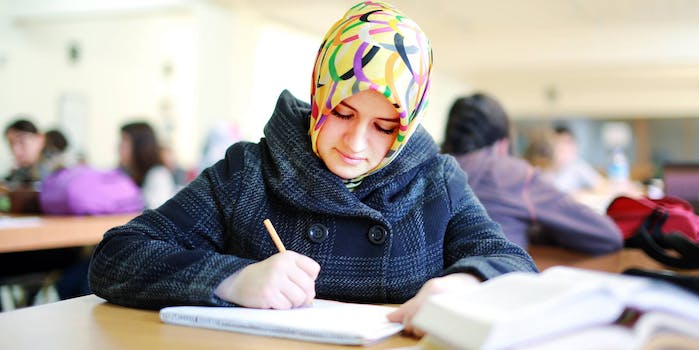 Muslims clap back with #MuslimsReportStuff.

Unfortunately, he wasn’t very specific about what that “something” is (however, many pointed out Trump insinuated Muslim-Americans won’t report terror-related crimes), but that didn’t deter a lot of Muslims on Twitter, who readily began reporting anything and everything happening in their lives.

"Hello, I'd like to report a dangerous racist misogynist demagogue on my TV…yes, I'll hold." #MuslimsReportStuff #Debates

It was White and Gold. #MuslimsReportStuff

#muslimsreportstuff My mother uses store-bought filo pastry for her samoosas every single year.

Moustafa Bayoumi was one of the first to tweet the joke, but ReThink Media’s Zainab Chaudary started the hashtag. The Daily Dot has reached out to Chaudary about her inspiration, but hasn’t heard back as of this posting.

Aside from the fact that Muslim people do report dangerous or suspicious behavior both in and outside of their communities, they are also people and citizens whose existence in this country shouldn’t be contingent on appeasing everyone else’s paranoia. Muslims don’t have any more responsibility to report things because of their religion. But if anything, we’ve learned there is a lot of samosa corner-cutting going on.