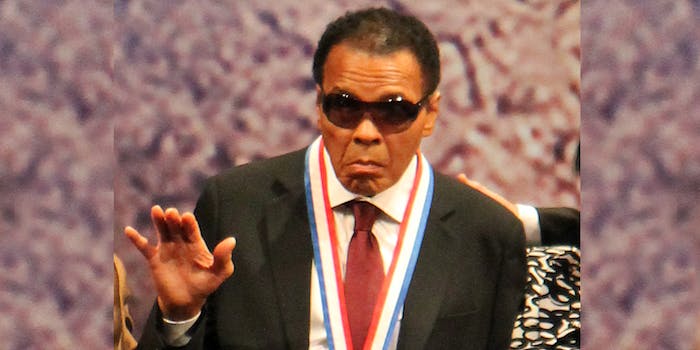 They asked him, 'Where did you get your name from?' and 'Are you Muslim?'

Muhammad Ali Jr., the son of boxing legend Muhammad Ali, was detained for hours by immigration officials at a Florida airport in early February, according to a new report from the Courier-Journal.

According to the Louisville newsppaer, 44-year-old Muhammad Ali Jr. was detained at the Fort Lauderdale-Hollywood International Airport on Feb. 7. He had just flown in from Montego Bay, Jamaica with his mother Khalilah Camancho-Ali, Muhammad Ali’s second wife, where Ali Jr. spoke at a Black History Month event.

According to family friend and lawyer Chris Mancini, Ali and Camancho-Ali were selected while going through customs because their last names sounded Arabic. Mancini said Camancho-Ali was released by officials after showing them a photo of her and Muhammad Ali, but her son had no such photographic evidence of the connection to his father and was questioned for nearly two hours.

The immigration officials repeatedly asked him, “Where did you get your name from?” and “Are you Muslim?” When Ali confirmed he is Muslim, officials continued to ask him about his religion and where he was born. Ali was born in Philadelphia.

U.S. Customs and Border Protection declined to comment specifically on Ali’s detainment, and airport officials did not respond to the Courier-Journal’s requests for comment.

The order was blocked by a federal judge days before the incident involving Ali, though the Trump administration’s appeal wasn’t denied until two days after. Earlier this week, a leaked draft of the president’s new travel ban looked almost identical to the original order, but it clarifies that travelers already in possession of approved visas are exempt.

Mancini told the publication that the Ali family is considering filing a federal lawsuit and is attempting to find other people have been subjected to similar treatment.

According to Slate, a similar case of profiling happened to the Trinidadian husband of journalist Stacy-Marie Ishmael—he was detained for more than three hours at the same airport, with border patrol agents asking him about his ethnicity and “how he got his name.”