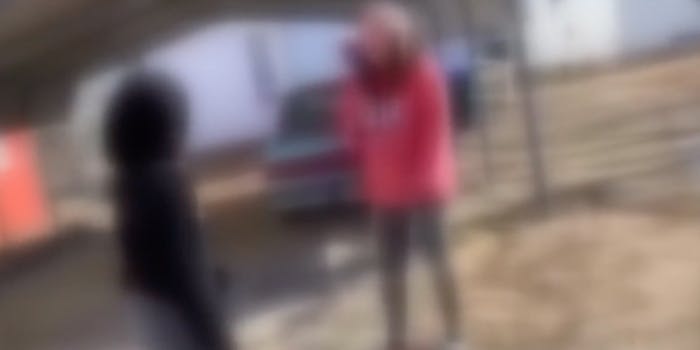 Teen says she is suicidal after bullying video goes viral

The 13-year-old is sharing her story to raise awareness of bullying prevention.

In January, a video of 13-year-old Liylah McDowell being assaulted went viral. As a result of the incident, the teen has expressed that she is now suicidal, as she ‘doesn’t feel “good enough for nobody.”

According to local Kansas news outlet WIBW, McDowell went to meet some friends at the Shawnee County Public Library in Topeka. Instead, she was beaten up in an alley across the street. Her assault was filmed and spread online.

“It’s just a hard thing that nobody should go through,” McDowell told KSNT in an interview. “Bullying needs to stop because it really does hurt some people’s lives.”

McDowell told WIBW that she is speaking out to raise awareness of bullying prevention.

“You do make life really hard and people do kill themselves over bullying and it’s not okay, so if you are getting bullied, tell that bully to stop. If you’re a bully you need to stop,” she told the outlet.

McDowell’s parents, Kassi and Michael McDowell, are also sharing their struggle of coming to terms with their daughter’s suicidal thoughts, which is why they chose to share the video on Facebook, according to WIBW.

“Something needs to be done to let these kids know that this is not okay to do this and this is the consequences that happen from it,” Michael told WIBW.

In an earlier report from KSNT, Michael said that he doesn’t understand how “anybody could be so heartless like that.”

The mother of the child who filmed McDowell getting attacked, Samantha Rayton, has also spoken out against her child’s actions, according to KSNT.

“What can we do to correct it, to prevent it from happening again?” Rayton told KSNT. “What’s my role? What’s my responsibility to my child? Not just my child, to the other kids, too, because it does take all hands on deck. It does take a community to correct a problem this big.”

WIBW reports that the McDowells have filed a police report with the Topeka Police Department. The department told KSNT it is investigating the incident.