Kickstart my… sigh, Mötley Crüe has a sex toy line

The “high-octane vibrators,” as Forbes describes them, are being produced by Lovehoney in honor of the band that notoriously detailed their sex lives in its 2001 autobiography, The Dirt.

In a press release, Lovehoney announces “eight powerful mini and midi-sized vibrators, emblazoned with the band’s iconic typography and distinctive artwork,” which are available for pre-order and will ship in September. However, we’ve seen Tommy Lee’s sex tape, and all the designs pale in comparison. 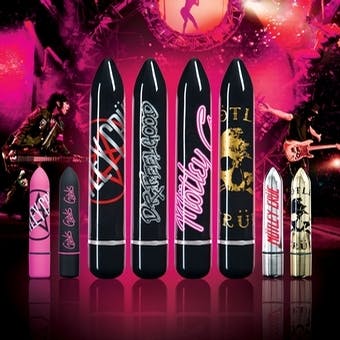 In other Mötley Nëws, lawyers for frontman Vince Neil pleaded not guilty on his behalf on charges of battery from an incident in April, in which Neil is accused of grabbing a woman’s hair and slamming her to ground at a Las Vegas hotel. Video of the aftermath of the altercation allegedly shows Nicholas Cage attempting to comfort Neil after the incident.

The Crüe seem like a natural pick to make products that empathize with women’s needs.