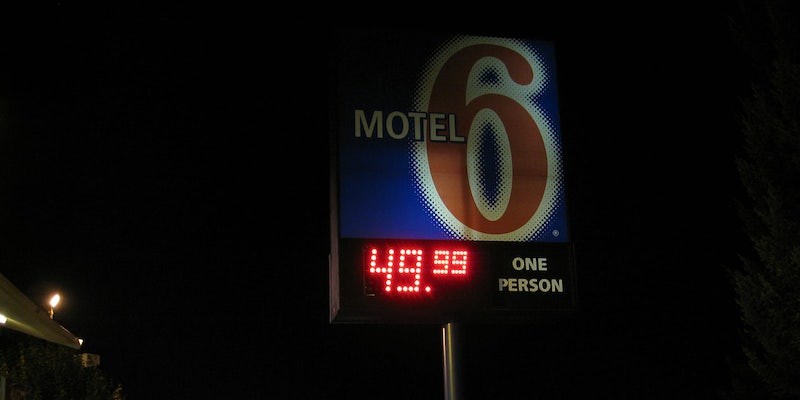 Agents have reportedly made at least 20 arrests from the tips.

Lawyers suspect that at least two Motel 6 locations in Arizona are handing over guest lists to U.S. Immigration and Customs Enforcement (ICE).

According to the Phoenix New Times, ICE agents have made at least 20 arrests at Motel 6 franchises between February and August. Though management did not respond to the publication, employees at two locations say they send their guest lists to the agency “every morning” and possibly receive compensation for the undocumented immigrants arrested in the sting.

“We send a report every morning to ICE—all the names of everybody that comes in,” one front-desk clerk told New Times. “Every morning at about 5 o’clock, we do the audit and we push a button and it sends it to ICE.”

Immigration attorney Denise Aguilar told New Times in an email that some of her clients “have heard (no telling how valid the info is) that ICE is paying $200 per person for the front-desk clerk to report.”

Phoenix officials can’t require motels to hand over guest lists, but owners can do so at their own discretion. ICE agents then conduct “knock and talks” at the motels, which means officers knock on doors of suspected undocumented immigrants and ask permission to enter. If they’re not given permission, the officers return with a warrant.

Pitts O’Keefe did not say where ICE gets leads on the locations of undocumented immigrants, however.

“I wouldn’t be able to confirm how we are getting our information. Those are investigative techniques that we wouldn’t be able to talk about,” she told New Times. “If hypothetically we were somewhere—if we did administratively arrest some folks—that happens all the time. We conduct targeted enforcement operations every day.”