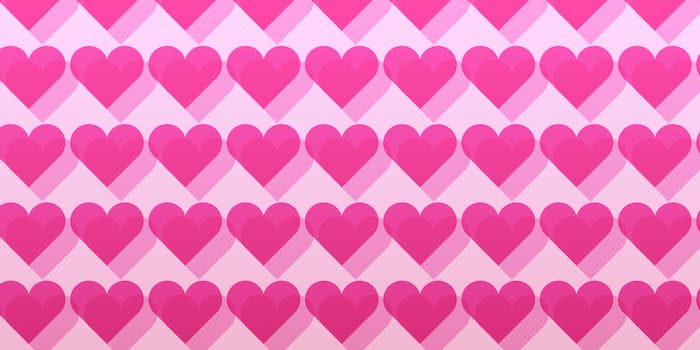 These are the most popular sex emoji used on Twitter

We've gotten creative with expressing our desires in our 140 character world.

If you haven’t heard by now, the Oxford Dictionary’s Word of the Year is the “crying tears of joy” emoji, which is pretty telling considering we use emojis to replace words more than ever. Now, instead of having to use your average-at-best dirty talk skills to tell someone what’s on your mind, you can send them some sexts using emoji, like several purple eggplants to get the thought across. And they know it’s going down.

Even though not many emojis are meant to have such a sexual connotation, we’ve gotten creative with expressing our desires in-line with our 140 character world. And it’s not just the United States sending right-ways pointing fingers and OK signs with a question mark (though we are avid sexters in this country) but it’s happening across Europe as well. I guess you can say that emojis have evolved to be the universal language of love; just about everyone now knows what a tongue sticking out and a banana means, anyway.

So which are the most common emojis used to sext across the world? In a new study conducted by Dr. Ed, a team of researchers looked through flirtatious messages sent on Twitter in both the United States and Europe to uncover which emojis we’re using to start the dialogue.

Here’s what they discovered: 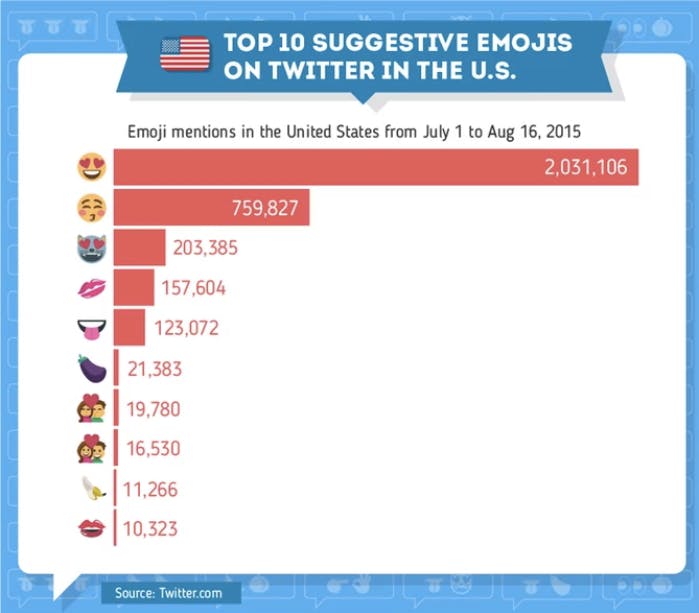 Here in the U.S. of A. we’re keeping it simple with our sexting emojis, opting for the smiling face with heart-eyes a vast majority of the time we’re in the mood remotely. Being featured in over 2 million tweets between July and April, the closest second to heart-eyes is the kissy face, coming in at just over 700,000.

As for those more suggestive emojis? Apparently the eggplant isn’t appearing on screens as frequently as it may seem (though Tinder users may tell you otherwise). Being used in about 21,000 tweets the not-so-creative substitute for male junk doesn’t seem so popular, nor does its counterpart the banana which came up (pun intended) only 11,000 times. The peach, another strange substitute for female anatomy, doesn’t even make the list. Hmm. 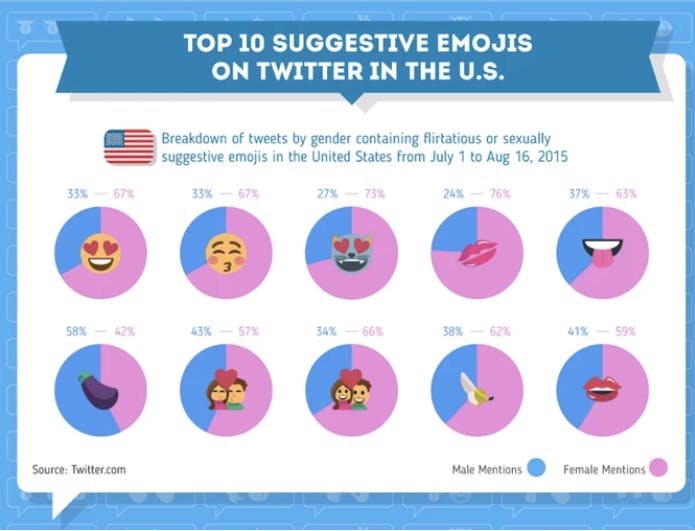 When it comes to using emojis during sexting, each gender has some different ideas. Take the heart-eyed emoji: Even though it’s the most popular in the U.S. for flirting, it’s mostly used by women, with 67 percent of ladies dropping this one into convos compared with 33 percent of men. Unsurprisingly, men tend to be more eggplant-happy, using that emoji 58 percent of the time compared to women’s use of 42 percent. But if you think women are staying away from some more suggestive imagery, you’re wrong; women were 62 percent of the Twitter users sending a banana and 63 percent of users sending the licking face.

3. Europe Is Down With Heart Eyes, Too 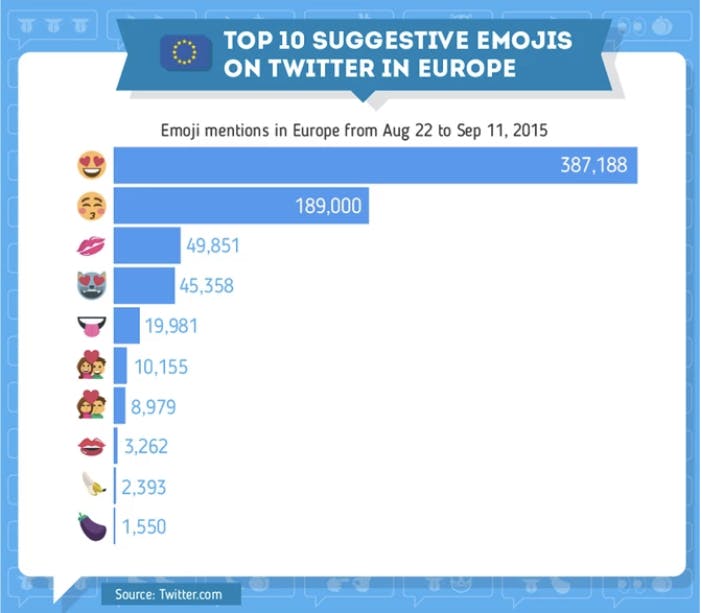 Even though Europeans are not as emoji-savy as us Americans, we still seem to agree on which flirty face wins out; Europeans also use the heart-eye emoji as their go-to when getting a little risque. The kissy face also came in second with almost 200,000 appearances in tweets with “throwing a kiss,” making it to third. The one thing I couldn’t help but notice? Europeans don’t seem to be to keen on phallic symbols. Continuing to keep it classy, Europeans used the banana and eggplant emoji the least frequently of them al

4. European Guys Are Too Cool For Emojis 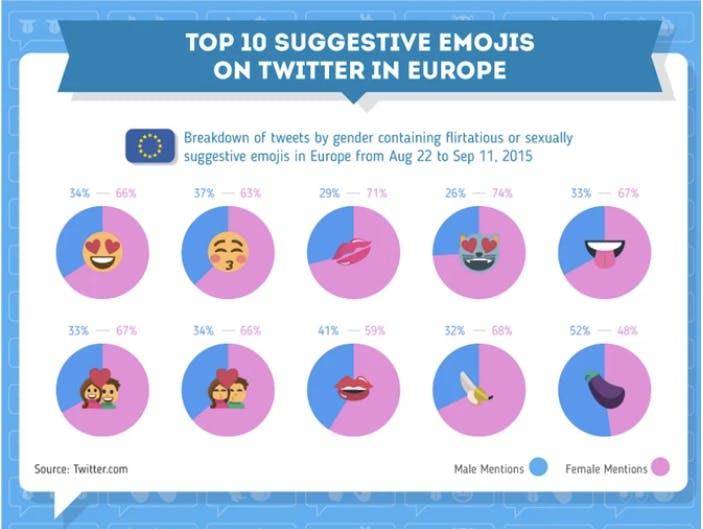 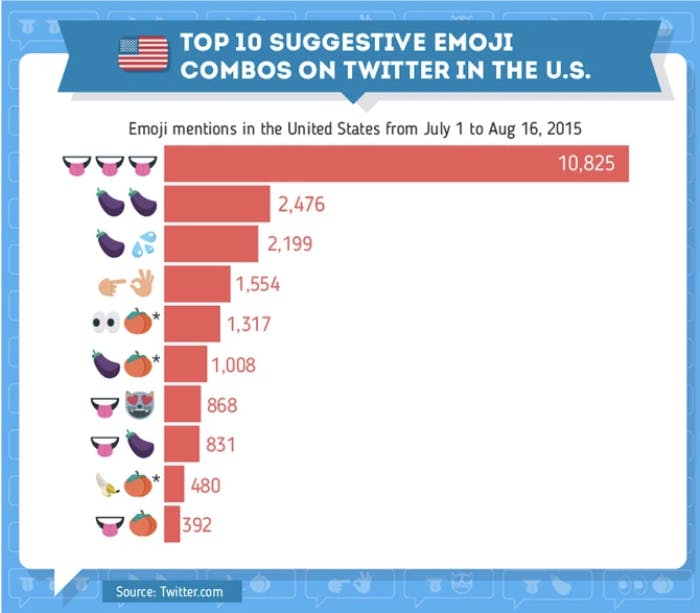 When it comes down to it, we rarely ever send just one emoji to get our point across. Emojis, rather, are almost like poetry; each image is picked strategically to create a scene. Sexting is no different. When the U.S. is kicking up its sexting game with emoji combos, its go-to almost always are three mouths with their tongues sticking out. Our good friend the eggplant seems to be bumped up on this list as well, coming in second with two eggplants being used most frequently and in third place as well when accompanied by a splash of…water? If you missed the peach the first time, it makes it on this list both next to a pair of eyes (a message to send nudes, perhaps?) and of course, next to the eggplant.

6. Europe’s Got The Same Idea With Hot Combos 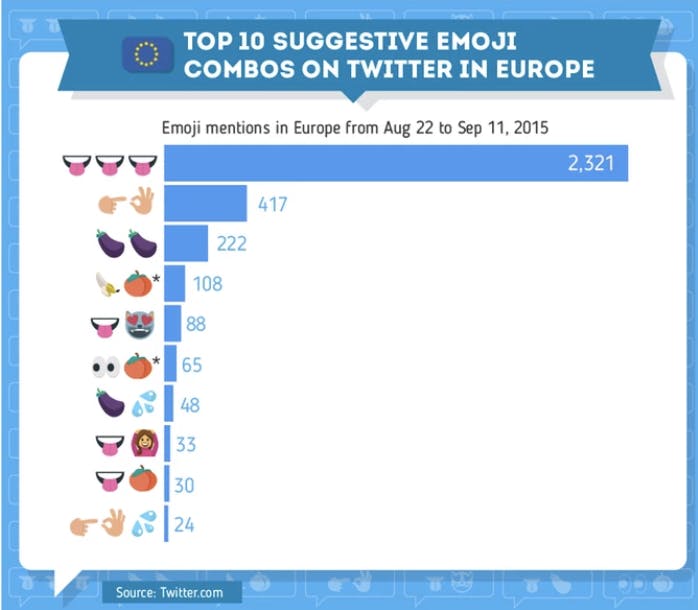 Much like us, Europeans are opting for three tongues sticking out faces although in much fewer numbers. Two eggplants got beat out for second on the European list though, trumped by the right pointing finger and the “OK” sign. The peach, however, doesn’t come in nearly as much during European tweets, showing up just three times. I’m very curious as to what the licking mouth and the girl with the hands on her head signifies to Europeans. Does it mean “lick me”? “Lick my head”?

Maybe just be careful if you’re sending that one over to your European bae.