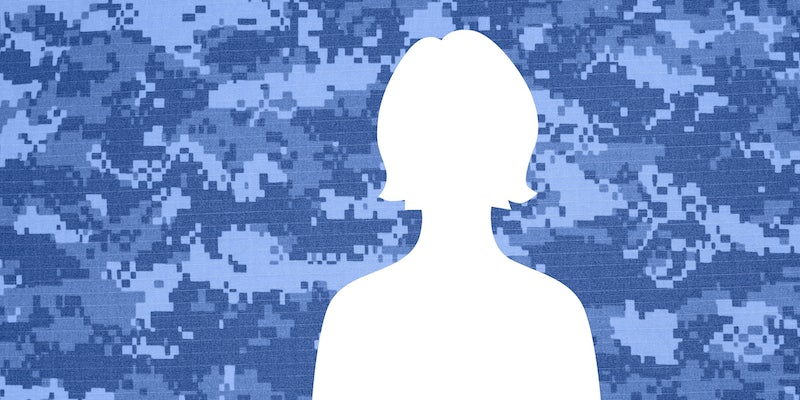 Harassers refused to see it as satire—and the group has since shuttered.

It started as a joke. Just a quick hypothetical to rattle up some friends.

“Are there any SAHM that are also military wives? I am in need of some support,” a woman posted on the Facebook group Mommy Wars. “What do you do while your spouse is away? I am having a very hard time with all of this. I ‘met’ this wonderful guy online, and he really wants to meet up. Is it wrong enough of me to do so while my man is deployed?” 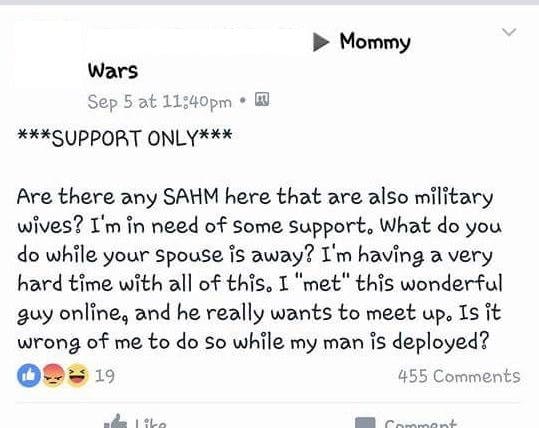 It didn’t take long before a handful of the group’s 23,000 members quickly chimed in. “Go for it,” many encouraged. One made an off-color joke about how rings don’t fill holes. Another wrote, “If he gets a six-month vacation with his buddies, then it should be fair game on my end too.”

But from there, things quickly escalated. Within two days, Mommy Wars members say they were receiving death threats. They were being messaged by men calling them “whores” and “cunts.” They were threatened with rape and the rape of their children. The Mommy Wars group was shut down, reactivated, and shut down again.

Before the group was shuttered for good, one man claimed that he was going to use military resources to track the women down. Somehow lost in all of the fervor was the fact that, of the hundreds of commenters, very few of them were actually married to a military man—or that the post wasn’t even true.

The women in Mommy Wars call the post “satire,” a way to smoke out trolls, so they could keep their group a safe place. And that’s what the Facebook group was to them—a haven for all the funny and inappropriate things they thought or laughed at in private but couldn’t in public as mothers, wives, and women.

Kylie Ungewitter, a member of Mommy Wars, described the group in a Facebook message to the Daily Dot as “a mockery of mommy support groups.” She noted that it grew into something more—”a group of friends and people who just liked to lurk and laugh. And it wasn’t just for mommies. There were people in there who don’t have children. There were also men in there. A place where we could go and let loose. Sometimes there were serious posts, sometimes we posted things on the internet that we found and would create a discussion. Sometimes we would joke around.”

One woman, who asked to remain anonymous because of the rape threats she’s received, explained: “It’s a relief being in a mom group where you can talk about your kids being little shits, and not get people posting links to ‘language use around your children hurts their IQ.'”

Another woman described the group as “a way to let off steam and make like-minded friends.”

But it was more than that, too. The women supported one another and raised money to help each other out. The group grew week after week and included both women and men. And every Friday they’d post something troll-baiting—like the military spouse post—”just to ruffle feathers and weed out the people who couldn’t handle the sarcasm and jokes of the group,” Ungewitter explained. Such troll-baiting is common online; you can find it everywhere you look on 4chan and parts of Reddit.

The Friday posts were often outrageous. One even went viral back in 2014, when a woman asked if she could be pregnant with a horse. 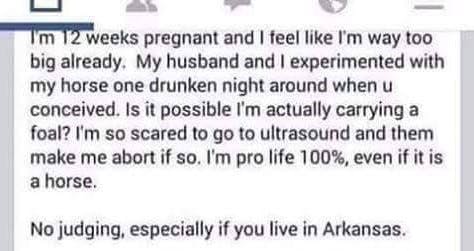 So when a member posted a question about whether she should cheat on her military spouse, many of the members didn’t even blink. (According to multiple people in the group, only two members who commented on the thread are married to members of the military.)

Soon, though, a Facebook page called OSMW—which in its “about” section says “does not represent the U.S. Military or its doctrines”—posted the screenshots of the chat, acknowledging that it was indeed a joke (the post has since been deleted). And then a man named Shane Presley copied the screenshots and posted them to his Facebook page. He did not acknowledge the joke.

In fact, he still doesn’t believe the post was a joke at all. He wrote to the Daily Dot in an email, “I posted because adultery, whether or not real nor fake, is nothing to joke about, and it is a punishable crime within the military laws.” (Adultery is a crime only for members of the military, but not their spouses. In 2002, President Bush signed an order that discouraged adultery prosecutions.)

Presley insisted he’s received messages from husbands thanking him for making the post public and outing their wives. Presley refused to show screenshots of those messages to the Daily Dot, saying that his Facebook account had been hacked and the messages deleted. Presley also refused to provide the Daily Dot with proof of the hack.

The screenshots of the Mommy Wars conversation were also posted unedited on a site called the Age of Shitlords, whose Twitter bio declares, “Feminism is cancer—Tumblr is an asylum for the mentally ill—progressives are degenerates.”

And that’s when members of the Mommy Wars group say the threats and harassment began. 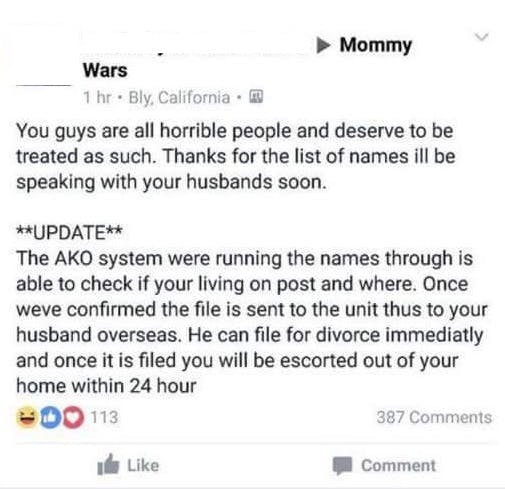 The hate was not just private. Many people shared Presley’s post with their own publicly violent messages toward the women. 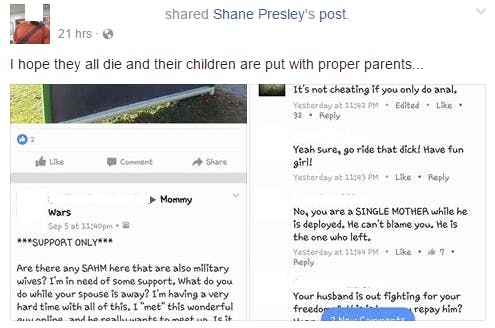 Several of the women messaged Presley privately, asking him to take down the post because of the threats posed to them and their families. Replies were then sent from Presley’s account, claiming it was his lawyer—they said Presley would not take the post down. Presley declined to provide his lawyer’s name to the Daily Dot, citing “attorney-client privilege.” Presley also denied that the women were receiving threats at all and implied they were making them up. 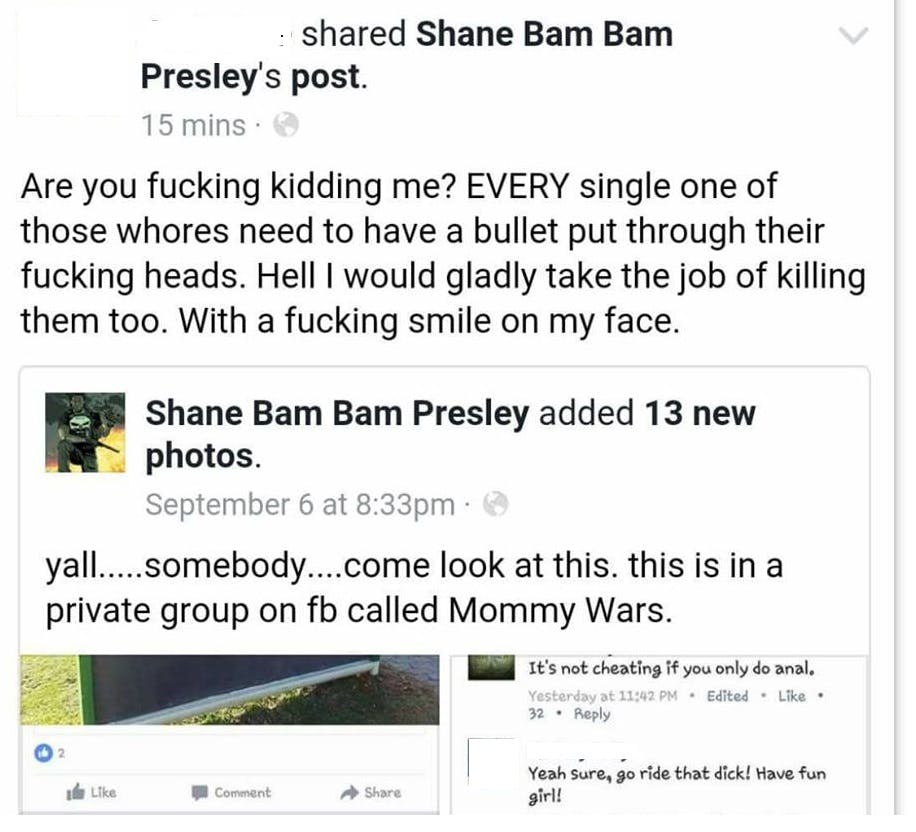 In an email to the Daily Dot, Age of the Shitlords founder, who goes by the moniker Hugh Mungus (but whose real name is allegedly Rudy Pantoja), claimed responsibility for infiltrating the group to get the screengrabs. (Presley says he was the one who got them.) “I have no regrets about exposing them,” he said of the Mommy Wars commenters. “My only regret is that I didn’t take more screenshots.”

He also denied that the Mommy Wars post was a joke. “The post was not a joke and neither were the comments,” he said.

For their part, the harassment victims said they notified Facebook about Presley’s posts but were told he did not violate the site’s community standards. Since the Age of Shitlords is a private site, the women have no recourse for getting the post—or their names—removed.

However, the women of Mommy Wars say the group has reassembled under a different name and are hoping to once again find a place to be themselves—this time without the criticism or the death threats.

Correction 4:19pm CT: An early version of this story misspelled the surname of Hugh Mungus’ moniker.