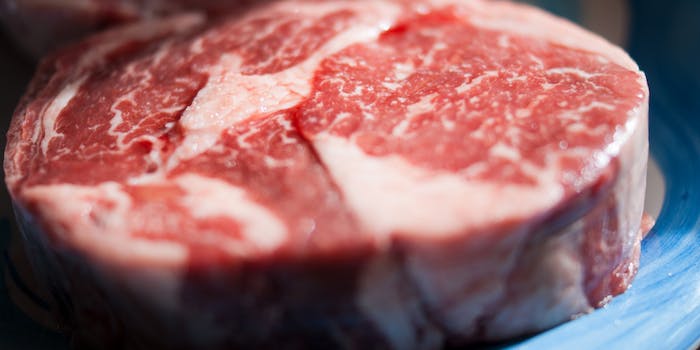 And you thought eating one 72-ounce steak was tough.

Ask anyone what superpower they’d like to have, and someone will probably say they want the ability to eat any amount of food without getting fat (or dying).

A woman from Sacramento seems to have this superpower.

Molly Schuyler, a 120-pound mother of four, took on the 72-ounce Steak Challenge at The Big Texan last Sunday, a feat that required her to finish a meal consisting of not only a 72-ounce steak, but also a shrimp cocktail, a baked potato, a side salad, and a roll with butter. The challenge rules are as follows:

A regular person would read these rules and think “Uh, no, thank you.” Not Schuyler, whose Facebook page describes her as “the number one female independent competitive eater in the world.” She reportedly made sure she blew her competition out of the water by successfully stuffing her face with not one, not two, but three complete sets of the restaurant’s steak meal, all in 20 freaking minutes.

She devoured her first steak dinner in four minutes and 18 seconds, already beating the restaurant’s current record of 4:58. (Schuyler herself set that record last year, when she attempted to eat two complete sets of the restaurant’s steak meal.)

She also beat four teams of two invited by the restaurant to compete against Schuyler for a thousand-dollar prize.

“I come in thinking I’m going to fail, but you know if I win, it’s a lovely parting gift and that’s cool. I also get free steak, so I don’t really lose,” Schuyler told News Channel 10, echoing the thoughts of steak lovers worldwide.

You can watch her destroy her competition at last Sunday’s event in this clip: