Are reaction GIFs a form of language?

MIT researchers are testing ways to study the visual language of GIFs.

We’ve seen Internet culture usher in all kinds of new ways of using language, from emoticons to capslock as modern-day love poetry.

Now, MIT Media Lab is asking you to help them crowdsource animated GIFs in the search for a universal visual language.

We already know that we react to emoticons the same way we do to real human faces. But can we match real human faces to emotions? MIT researchers Kevin Hu and Travis Rich hope to amass a compendium of GIFs that express a broad range of universal human emotions, from joy to jealousy.

GIFGIF (we’re pronouncing it “Gift-jiff”) offers basic “this or that” quizzes to engage viewers in selecting the best animated GIFs to match specific emotions. The goal is to map the emotional language of Gifs “for science and delight,” according to the project’s Twitter.

Each mini-quiz offers the user a choice between two GIFs or “neither” for various emotions. It’s harder than you might think. 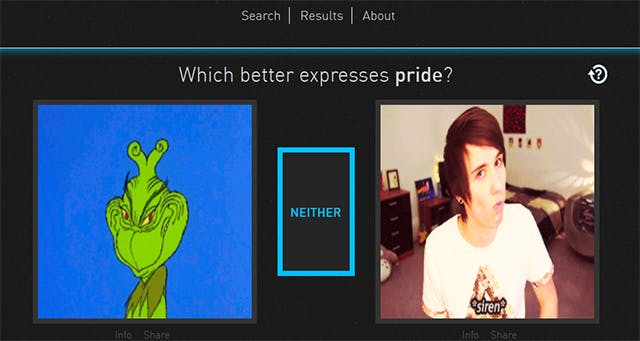 Pride? The Grinch or Dan Howell? How am I supposed to choose? Better go with Neither.

Though the quiz asks you to put on your thinking cap, it’s all for a good cause.  The lab pulls GIFs from Giphy to create a searchable database of GIFs based on emotional spectrums. Additionally, the science gleaned from getting millions of people to vote on visual expressions of emotions could be used in a wide variety of disciplines from linguistics to neuroscience and psychology.

But the best part of all is that now you can search a ready-made database of reaction GIFs whenever you need to evoke a specific emotion. It’s not a flawed map: I tried to find a reaction GIF for what happens when the average fangirl sees a picture of their beloved idol and came up empty. But I guess there are still some emotions that really can’t be put into words. Thankfully, pretty soon we might have reaction GIFs for those, too.