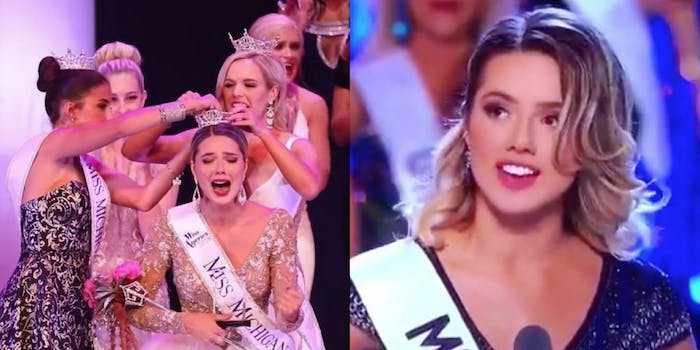 She may not have won Miss America, but she did win over hearts.

Miss New York, Nia Franklin, might have taken home the crown at this year’s Miss America competition, but it was Miss Michigan who caught the attention of viewers last night when she evoked the Flint water crisis while introducing herself.

“From a state with 84 percent of the U.S. fresh water, but none for its residents to drink, I’m Miss Michigan Emily Sioma,” she told the audience.

"I'm from the state with 84% of the U.S.'s fresh water, but none for its residents to drink." pic.twitter.com/S2IzKvgAig

The crisis began four years ago, when a switch in water supply with lead contamination and other toxins led to the exposure of 100,000 Flint residents, and an outbreak of Legionnaires’ disease that killed 12 people. Today, Flint residents still do not have access to completely clean water, and won’t “be fully safe” until the lead pipes in the water supply are all replaced in 2020, according to Politico.

Across Twitter, Miss Michigan drew the support and praise of many, who found that her opening statement was much more impactful than any sort of bragging she could have done about herself.

Been rolling my eyes all weekend that Miss America is still a thing but MISS MICHIGAN FOR PRESIDENT https://t.co/Y6Wib6DVRg

So Emily Sioma, Miss Michigan is a sexual assault survivor/activist who takes her moment on stage at #MissAmerica2019 to go OFF about the Flint Water Crisis on Network television in front of a million viewers? We stan. https://t.co/VSesQDELnv

my face at the miss michigan intro #missamerica pic.twitter.com/qVE3Vq0R7m

not one for beauty pageants but, instead of saying her college and major, Miss Michigan introduced herself saying “I’m from a state that is home to 84% of the worlds fresh water yet not all its residents have clean water to drink, I’m Emily Sioma from Michigan”

While Sioma didn’t advance to the top 15, she at least used her few seconds of airtime to advance Flint’s narrative and remind others that the community has still yet to have their basic needs met by the state.