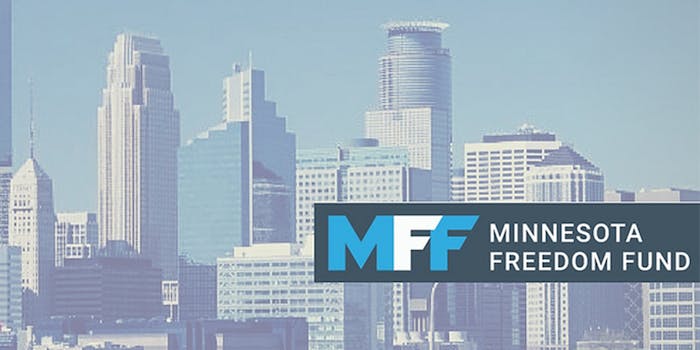 'This is a small nonprofit that received a huge influx during a major crisis.'

The Minnesota Freedom Fund came under fire Monday night after it revealed it had only spent about $200,000 to bail out protesters of the tens of millions it allegedly received in donations.

Activists said that although the numbers may lift eyebrows, there are valid reasons behind why the fund hasn’t blown through the donations.

Since 2016, the Minnesota Freedom Fund has worked to pay bail for people who are imprisoned before trial and bond for immigrants who have been detained. The organization received a deluge of donations at the end of May for protesters who gathered in response to the death of George Floyd, the unarmed Black man killed by Minneapolis police officer Derek Chauvin. (Disclaimer: I donated to the Minnesota Freedom Fund.)

On its “Frequently Asked Questions” page, the Minnesota Freedom Fund said it received more than $30 million in donations in response to George Floyd protests, a massive leap from a few weeks ago when it was “a small fund that paid a maximum of $1,000 in the course of a ‘normal’ day.”

“Appreciate all those calling for transparency,” the organization tweeted on Monday night. “We see y’all. Our values and mission have not changed since 2016. Be on the lookout for things coming on our end. Be well.”

In a follow-up tweet, the group wrote, “Without jeopardizing the safety of the folks we bailed out we paid well over $200k in the weeks since the uprising alone. We are working on doing more.”

The announcement did not sit well with Twitter users, who slammed the Minnesota Freedom Fund for not using more of its donations to bail out protesters.

Many users alleged that the organization raised $35 million in recent weeks and demanded to know what it was doing with the remaining funds, causing “35 MILLION” and #whereisthemoney to trend on Twitter. (The Minnesota Freedom Fund did not immediately respond to the Daily Dot’s request for comment on the exact amount it raised and how it plans to spend the remainder of its donations.)

“Minnesota Freedom Fund has gained 35 MILLION in donations and had stated they have only distributed a little over 200k to bail out front line protestors,” writer Muna Abdulahi tweeted. “I’ve spoken to many people who’ve said MFF has not provided resources when in need. #WhereIsTheMoney.”

People began to defend the Minnesota Freedom Fund, though, suggesting that the organization was overwhelmed by the massive amounts of donations and is still figuring out how to properly spend those funds.

“I feel like everyone yelling at the Minnesota Freedom Fund for only using 200k so far of the 35 MILLION dollars it raised doesn’t understand how hard it is to efficiently spend, manage, and account for that kind of money when you’re clearly not set up to work on that scale,” comedian and podcaster Kath Barbadoro wrote.

“This kind of thing is why we don’t look to nonprofits or NGOs as long term solutions to problems,” Barbadoro continued. “It’s not bc some of them are scammy it’s bc even if they aren’t, they’re inefficient band aids. End cash bail.”

Activists added more context to the controversy, explaining that the small nonprofit has been clear that it was overburdened with unprecedented donations. (At one point, the fund even began recommending that people donate to other bailout funds.)

Activists said on Twitter that a couple of weeks isn’t enough time to distribute all the funds because of regulations on what nonprofits can use donated money on and the fact that the coronavirus has slowed down bailout hearings.

“I am Black women who works in nonprofit, lives in St. Paul and am confused by the outrage directed at MFF,” Twitter user @MaryMN9 wrote on Twitter. “How quickly did people think the money would go out? This is a small nonprofit that received a huge influx during a major crisis.”

People also noted the irony that Twitter users were upset about a two-week wait when the usual timeframe can be much longer.

On Tuesday morning, the Minnesota Freedom Fund addressed the backlash on Twitter. The organization said it paid all protest bails that came its way and would continue to.

“To say again: we are paying, and have paid, all protest bail that’s come our way. There are a lot more people in jail on bail,” the organization wrote. “Now, we can help on a scale impossible last month. We want to spend this money down to get people out of cages (ICE too) and we want to do it right.”

Update 10:45 a.m. CT, June 16: The Daily Dot updated to include more context from activists and a statement from the Minnesota Freedom Fund released after publication.