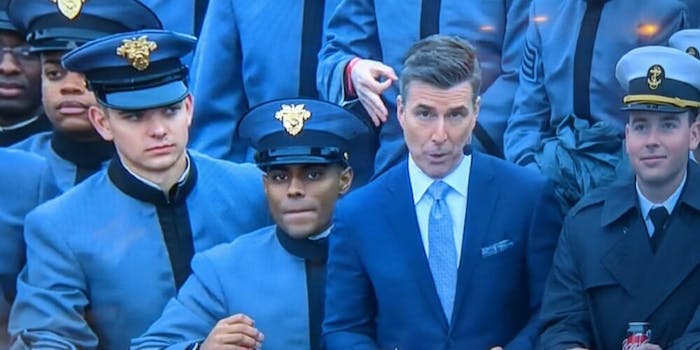 After an uproar on social media, military officials say they’re investigating what looks like West Point student cadets flashing a white power symbol during an Army-Navy football game over the weekend.

In a video circulating on Twitter, a student can be seen making a hand sign that has been famously used by racists, like the man charged with the terrorist attacks at two New Zealand mosques. At least one other student made the same hand gesture a couple of seconds after the first student.

“West Point is looking into it, and we do not know the intent of the cadets,” Lt. Col. Christopher Ophardt, director of public affairs, told NBC News.

People posted clips of the video in hopes of calling attention to the incident and identifying the students.

“Wow, that chump cadet is flashing the white power sign behind the head of a black cadet on national TV. That’s so sad and unfortunate. He disgraces West Point and the U.S. Army,” Twitter user and veteran @KwikWarren wrote.

Wow that chump cadet is flashing the white power sign behind the head of a black cadet on national TV. That’s so sad & unfortunate. He disgraces West Point & the US Army. Too bad his face can’t be seen. He needs to be identified. @WestPoint_USMA https://t.co/O6SHKDKVAQ

The hand sign became known as a white power symbol in 2017. Users on 4chan, an online anonymous forum, started convincing people that the hand gesture that was once thought to be the symbol of “OK” was actually a white supremacist symbol. Since then, the hand gesture has become widely known as signaling the letters W and P for “white power.”

President Donald Trump was present and on the field for the game, which took place on Saturday.