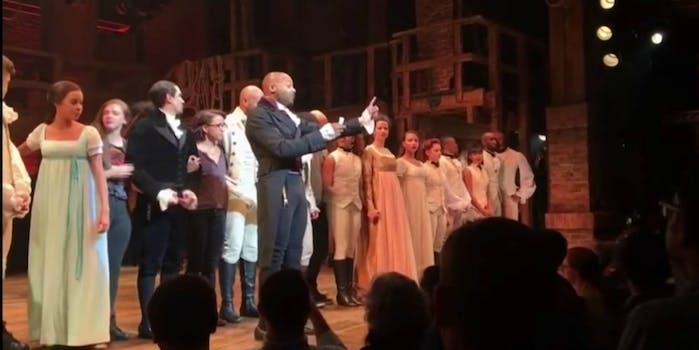 Not surprisingly, Donald Trump weighed in, as well.

Vice President-elect Mike Pence was booed by the audience and then lectured by the cast at Friday night’s performance of Hamilton, drawing acclaim from many parts of the internet.

But not everybody was pleased with the reception Pence received. Take, for instance, Donald Trump.

On Saturday morning, Trump woke up, presumably learned about the Hamilton cast explaining to Pence why they were scared about a Trump presidency, and then fired up his Twitter account.

Here was what Trump was protesting. Following the performance, Brandon Victor Dixon, who plays Aaron Burr in the show, delivered a passionate speech about how he wants the next administration to think about every citizen in this country.

And after reading Trump’s tweets, Dixon himself took to Twitter to offer a response.

conversation is not harassment sir. And I appreciate @mike_pence for stopping to listen.

But after news broke late Friday night about the post-show conversation-starter—and particularly after Trump weighed in Saturday morning— Twitter was alive with commentary. Here were some of the best tweets we found, including this one from the man who originated the role of George Washington in Hamilton.

The countless Americans that have been Insulted, Degraded, Marginalized, Harassed, Intimidated. APOLOGIZE for that! APOLOGIZE for your HATE!

Proud of @HamiltonMusical. Proud of @BrandonVDixon, for leading with love.
And proud to remind you that ALL are welcome at the theater.

Did we really just elect an oversensitive little baby who can't handle a few Broadway queens making a speech? How is he gonna handle war?

Everyone mentions the booing of Pence at "Hamilton." No one mentioned Pence's epic 20-minute rap battle with @Lin_Manuel afterwards.

I've seen all possible joke formulations except the obvious "but other than that, how was the play Mr. Pence?"

Not everybody was cheering on Dixon and the rest of the cast.

That doesn’t matter much, but I’m a little bored of seeing the man cast as some sort of trendy rainbow warrior.

The arrogance and hostility of the Hamilton cast to the Vice President elect ( a guest at the theater) is a reminder the left still fights.

The Sound of Whining #NameAPenceMusical
"The hills are alive with the sound of whining. In tweet after tweet…" 🎵 https://t.co/8DIJKx98Ok

The second: #boycotthamilton (though many of these tweets actually supported Dixon’s speech).

And, of course, there was also at least one generous offer to those who would give up their Hamilton tickets to protest.

On a side note, if any of yall #BoycottHamilton folks did have tickets, send them to me and I'll make sure they're properly disposed of.