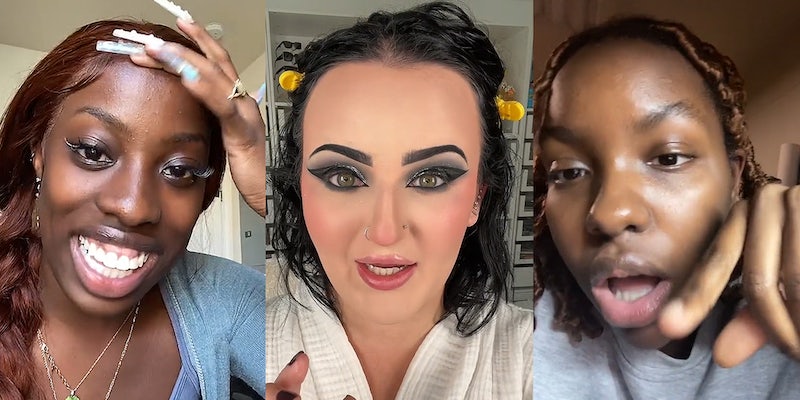 ‘Just finished working, it’s 5:19. Try being an influencer for a day’: Beauty influencer Mikayla Nogueira called out for complaining about her job

'Mikayla..babes, I'd love to be an influencer for a day.'

If you’ve checked out makeup tutorials on TikTok, there’s a good chance you’ve come across Mikayla Nogueira. She garnered over 13.5 million followers on the platform with her consistent posts, with many users praising her perceived “down-to-earth” personality. Others also seem to enjoy her distinct Massachusetts accent.

However, she’s being called out by TikTok users for seemingly complaining about her job as an influencer being difficult, something that former full-time social media Influencers have gone on record to refute.

The drama all began once a clip of Nogueira started making the rounds on TikTok. “Just finished working, it’s 5:19,” she says in the video. “Try being an influencer for a day. Try it.”

The video then transitions to several other clips of her showing off designer handbags in front of the camera from brands like Christian Dior, Chanel, and Louis Vuitton. The video was shared to TikTok by user @ilovewater2001, though it’s unclear where Nogueira first shared the clip of her complaint.

Folks on the platform collectively eye-rolled at Nogueira’s comments.

“I knew I didn’t like her for a reason,” another shared.

“Yes putting on makeup and filming and editing is so hard,” a third wrote.

Others said that there’s a clear difference between a job being time-consuming and a job being difficult.

“At this point it’s so hard to support creators…like why bother,” a second argued.

Other content creators uploaded their own clips commenting on Nogueira’s remarks, like Anayka She (@anayhashe). She made several points regarding the phenomenon of influencers “complaining” about the nature of how grueling their work is to others online.

She reflects on her experience as an influencer since gaining a large following on TikTok in 2020 and compares it to her previous experiences working “real jobs,” which she began at age 12.

“I will tell you, something that has helped me through these past two years being an influencer is that yes, being an influencer is a job like any other, while the job is not hard, it is very tedious,” she says. “And also depending on the kind of person that you are if you have anxiety…it could be very stressful…it’s a very social/facial image kinda pressure. Being called a cracker might hurt your feelings, but you cannot look me in my face and tell me it’s hard.”

While She claims that her work as an influencer is “draining” and “tedious,” she claims it isn’t “hard.” The TikTok also shares a conversation she had with her manager.

“My manager had told me something before, and it really stuck with me,” she recalls. “The problems that I have now—being an influencer—are problems that I wish I had two or three years ago when I was working a regular job.”

She also states that as a Black creator, her experience as an influencer is quite different from white creators, like Nogueira.

“My number one problem is trying to be paid the appropriate amount that I should be paid, that my white counterparts are being paid,” She concludes. “I promise y’all, if I was rolling in dough, you would never hear a peep…from me, babe. You just gotta know what things you can and cannot say. Yes, everybody has struggles…but that struggle clip [Nogueira’s] was a little crazy.”

The creator adds that some influencers are “normal,” and not all of them have Lamborghinis and Louis Vuitton bags, and some people do. “That’s OK,” she says.

One responder to Anayka’s video summed up a recurring theme when it came to responding to the notion that being an Influencer is “hard.” “Just because you work a lot doesn’t mean you’re doing hard work, I feel like influencers forget that,” they wrote.

Another viewer added, “And it’s just the fact that she was complaining about getting up at six and ending at five? Like that is so normal.”

Others also pointed out that Nogueira recently uploaded a clip where she discussed purchasing a new home. “Weeks ago she literally posted about BUYING A HOUSE,” one user wrote.

Anayka’s wasn’t the only response to Nogueira’s post, however. It spawned a wave of videos calling the influencer out.

Another content creator on the platform criticized the fact that Nogueira thought ending her work day at 5:19pm was somehow an absurd time to finish working after being up at 6am.

“Coming home from a full day of university only to have to change to go serve people food and drink for 8 hours,” the text overlay reads. “Mikayla..babes, I’d love to be an influencer for a day.”