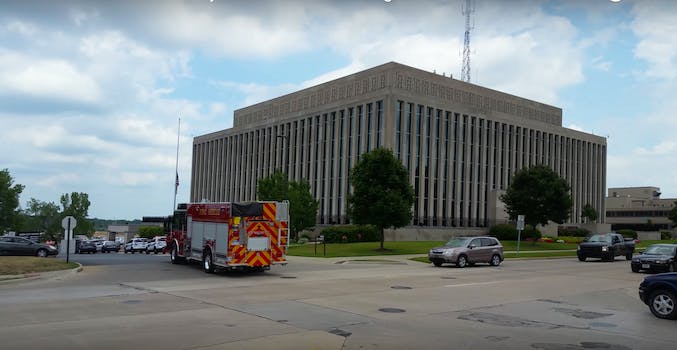 A sheriff's deputy has also been hospitalized with a gunshot wound.

Two court bailiffs were killed and a deputy sheriff wounded at a southwestern Michigan courthouse on Monday.

The gunman, who was reportedly on his way to jail, grabbed a deputy’s gun and opened fire, Berrien County officials told reporters at the scene in St. Joseph, Michigan.

The shooting took place on the third floor of the courthouse. Police say the suspect was also killed during the attack. A deputy sheriff who was shot in the left arm and finger being treated at Lakeland Regional Hospital, Berrien County Sheriff Paul Bailey said at a press conference. A fifth person was also being treated for injuries, but it was not immediately clear if they were wounded by gunfire.

“I stand here with a heavy heart,” Bailey said. “A person has shot two bailiffs. They’re both deceased.” The shooting began with a “disturbance” which began at roughly 2:25pm CT, he said.

One of the slain bailiffs was a retired state trooper, according to the Detroit Free Press. Berrien County Commissioner Mac Elliott described the bailiffs as “professional, always courteous, just great people,” the newspaper reported.

"I stand here with a heavy heart" -Sheriff Paul Bailey at presser outside courthouse pic.twitter.com/aeEPUV9vzn

MSP has secured the scene at the Berrien County courthouse and started its investigation into the shooting that occurred this afternoon.

Michigan State Police have secured the scene and begun an investigation into the attack, according to Gov. Rick Snyder.

Sen. Gary Peters (D-Mich.) extended his thoughts via Twitter to the victims and their families. Sen. Debbie Stabenow (D-Mich.) said the news was “horrible,” that she was monitoring the situation closely, “and my heart breaks for everyone affected.”

“This tragic event reminds us all too well that our law enforcement officers have their lives on the line every day not knowing what that day will bring,” Rep. Fred Upton, whose district includes the courthouse, wrote on Facebook. “We have lost two very able public servants and we all grieve for them and their families. As we learn more about this horrific situation, one thing is clear: We must do better to prevent these types of tragedies from occurring.”