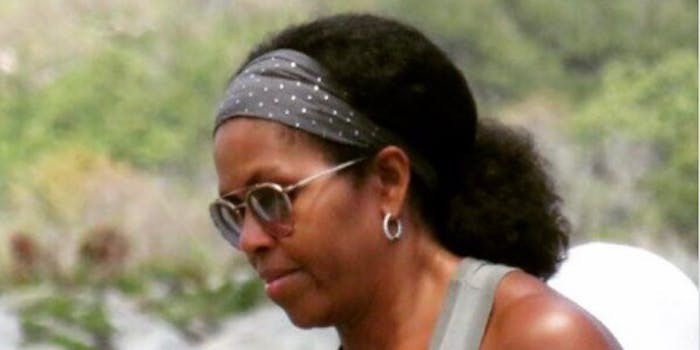 If you thought there was nothing the country’s preferred president, Michelle Obama, could do to get more love, you were wrong. Last night Twitter user @meagnacarta dropped a photo of the former first lady “flaunting,” as the tabloids like to say, not just glowing skin and those enviable arms, but also her natural hair, wrapped in a gray bandana and tied in a no-hassle pony.

This is the picuture I have been waiting on for like 3 years. COME ON NATURAL. pic.twitter.com/HF8AYpsciB

Even though it cannot be confirmed where and when the photo was taken, or even if it was post-FLOTUS status, the internet went wild over Obama going au naturale.

She's living life and I'm all the way for it lol. pic.twitter.com/s2mQr1sgiH

It seems life out the political spotlight has been kind to women powerhouses and their proclivity to DGAF. See the mafia-style leather blazer Hillary Clinton strutted on stage wearing last week when she took down Bill O’Reilly’s and Sean Spicer’s demeaning comments toward women of color. Nice work leaving The Man’s expectations of style and polish behind, ladies. Do you.