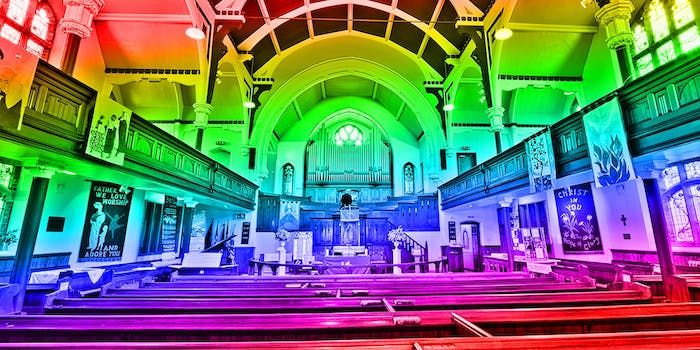 Holy revolution: Over 100 Methodist clergy come out as LGBT in online letter

Campaigns to make Christian churches more LGBT-friendly are ramping up.

It’s become a cliché to call people “brave” for coming out as LGBT. But for 111 Methodist clergy who came out en masse in an online letter on Monday—risking their jobs and facing church discipline—brave is the only word that applies.

The letter was posted online just one day before the start of the General Conference of the United Methodist Church in Portland, Oregon. The May 10–20 conference draws international church clergy and members, and this year’s most controversial topic is whether the church will overturn its laws that discriminate against LGBT members.

In the letter, the clergy explain why they felt forced to remain silent about their LGBT identities, as well as why they were choosing to come out in the mass letter: to provide hope for LGBT youth in the church, and to seek reconciliation with a church that has resisted facing and embracing the diversity of its members.

While you have welcomed us as pastors, youth leaders, district superintendents, bishops, professors, missionaries, and other forms of religious service, you have required that we not bring our full selves to ministry, that we hide from view our sexual orientations and gender identities. As long as we did this, you gladly affirmed our gifts and graces and used us to make disciples of Jesus Christ for the transformation of the world in the varied places you sent us.

While some of us have been lucky to serve in places where we could serve honestly and openly, there are others in places far more hostile, who continue to serve faithfully even at tremendous cost to themselves, their families, and yes, even the communities they serve, who do not receive the fullness of their pastor’s gifts because a core part must remain hidden.

The group Reconciling Ministries Network launched a campaign called It’s Time in April that offers a concrete plan for rehabilitating United Methodist Church (UMC) policies so that clergy will no longer be forced to be closeted.

Then on Monday, Reconciling Ministries Network posted the clergy letter on its website, which promptly crashed due to immense traffic. The letter was reposted on the website of Christian LGBT group Believe Out Loud, where all 111 names of newly out LGBT reverends and pastors can be found.

Some of the formerly closeted ministers posted on social media, expressing feelings of relief and pride.

Proud to be among #Portland111 LGBTQ United Methodist clergy who come out to Church today https://t.co/krCVAoGE9W #CalledOut @FORPeace

Because of who I am & how & whom I love, I do not fit into the neat categories that the #umc demands. #calledout https://t.co/z68GCuaop0

For every one of the clergy who became #CalledOut yesterday, there are dozens more still silently, faithfully,… https://t.co/GWRqmO6V7A

A spokesperson for Reconciling Ministries Network told CNN on Monday that about 80 percent of the clergy who signed on to the letter were coming out for the first time ever, while the rest ministered in churches that already allowed them to be quietly out of the closet.

Other voices within the Methodist denomination have joined in to support the LGBT clergy who came out this week. In a video posted to YouTube, the youth members of a church in Sao Paolo, Brazil, declared, “It’s time.”

The campaign to make Methodism more LGBT-friendly comes on the heels of a similar effort to curb discrimination at Christian colleges. Earlier this year, students across several religious colleges called for their schools to #GiveBackIX in the wake of colleges increasing applications for Title IX waivers, which advocates believe is a way to legally continue anti-LGBT discrimination.

But not every Methodist is ready to see the church officially open its arms to its LGBT congregants and clergy. On Monday afternoon, Good News magazine Vice President Rev. Tom Lambrecht sent out a statement calling the letter a “public relations campaign” that was “designed to overwhelm our denomination’s infrastructure.”

“For the most fruitful future of United Methodism,” said Lambrecht in the statement, “we believe the delegates should resist the pressure to go along with a culture that has discarded biblical values regarding sexuality and marriage.”