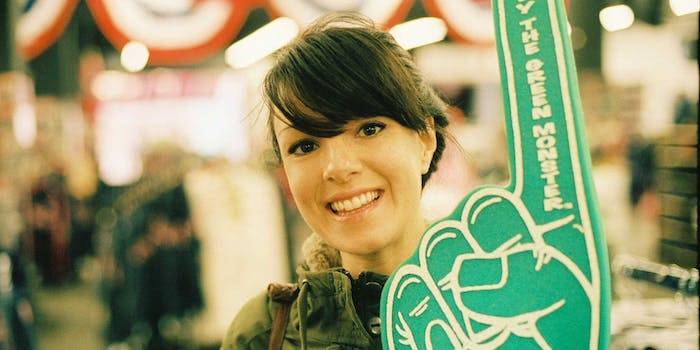 Men’s magazines: Here’s how to alienate your entire readership

Men's Health time-travels to 1922 to teach men how to talk to women about sports.

Are you a publisher interested in alienating an entire demographic of readers? Then look no further than venerable male-fitness print stallion Men’s Health, which tweeted this gem this evening.

She sees the game differently than you. Here’s how, and what to do about it: https://t.co/AaQXS1bsWY pic.twitter.com/fh83bb6Zc4

Now, I like sports. I like sports a lot. I have gotten in nearly relationship-ruining arguments because of how much I love my Oregon Ducks (yeah yeah yeah, the Pac 12 is a mess, I know, but Arizona was undefeated to begin with and we’re operating with an O-line younger than the rage-induced white streak of hair this article just gave me), and I may or may not have paid permanent bodily homage to the Portland Trail Blazers.

So no one had better dare try and dummy-speak to me about sports. That said, it doesn’t matter even a little bit that some women don’t like sports. This is offensive on a few other levels.

A huge number of disturbing things about this. Number one is that it was written by a woman. https://t.co/ijASUCvGIH pic.twitter.com/srrmNKKP3R

The article (article?) itself is 100 words of non-advice. We get one throw-away quote about how women generally identify with personal stories more than stats. Girls are bad at numbers, right?

It argues that telling us weepy or heartwarming personal stories about athletes will win us over. Hell, maybe some broad who hates football will hear about a coach’s fundraising efforts for a charity and suddenly that whole “line of scrimmage” thing will make sense!

Naturally, Twitter is pulling no punches at Men’s Health‘s expense. (Damn it, I just used a sports idiom! Someone tell me how good of a dad LeBron James is so I don’t skip my period this month.)

how ball kick far? is good ball? RT @MensHealthMag: She sees the game differently than you. pic.twitter.com/QReUNV2PjT

Left that @MensHealthMag tab open and laughed at their garbage ads oh wait those aren’t ads, that’s their content pic.twitter.com/MMVM1f8iI7

HOW TO TALK TO WOMEN ABOUT SPORTS: – do not show fear – bang pots and pans together – run in zig zags – spray snout with bear mace

the article literally starts with “not all women”

hi @MensHealthMag, you don’t know me, but i run @ESPNMag’s annual analytics issue. also, i have a vagina!

BroBible was first to weigh in: 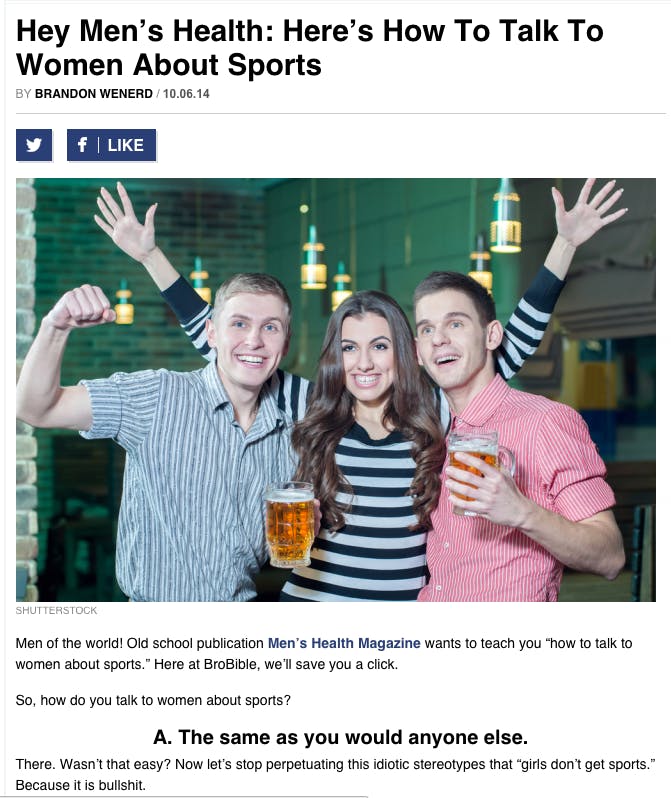 The only way the article could have come back from this headline and summary?

“With words that, put in the correct order, are articulate and make sense.”

But if you’re still clueless about how to talk to women about sports, try this:

how to talk to women: don’t

Photo via chase_eliott/Flickr (CC BY 2.0)