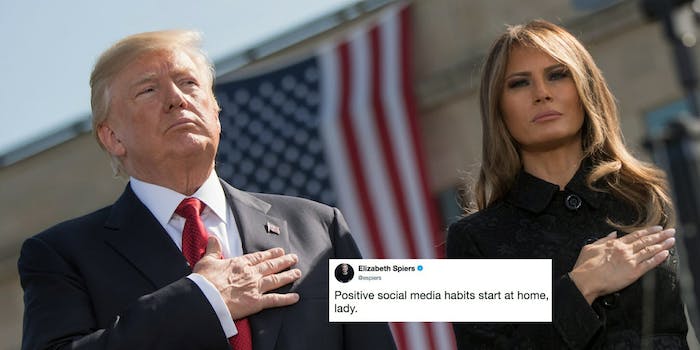 First Lady Melania Trump has called upon adults to help their children develop “positive habits with social media.” Being that her husband is notoriously reviled for his “presidential” Twitter fingers, however, critics across the internet are less than receptive.

On Monday, speaking out for the first time about the Feb. 14 Parkland, Florida, shooting, Trump delivered her remarks at a luncheon for spouses of U.S. governors at the White House, according to the Hill.

“As I have said before, it is important that as adults we take the lead and responsibility in helping our children manage the many issues they’re facing today,” Trump said. “This means encouraging positive habits on social media and technology. Even limiting time online and understanding the content they are exposed to on a daily basis.”

Adults should also encourage other adults to have positive habits with social media. https://t.co/d9csttei97

So is Barron barred from seeing his father’s bullying habits on twitter? Inquiring minds want to know. https://t.co/krnN0r9ahz

File this next to Bristol Palin's abstinence PSA.

Maybe she could try this. pic.twitter.com/perEpKebCj

It begins at home, @FLOTUS.https://t.co/7fywjok0s8

Girl, who is "we"? pic.twitter.com/A7PKMguaQ5

According to the Hill, President Trump‘s Twitter habits became a point of contention earlier in the day during his meetings with the country’s governors. Democratic Washington Gov. Jay Inslee had told the president he rejected the proposal to arm teachers, and suggested, “we need a little less tweeting here, a little more listening.” President Trump didn’t respond to the comment.

If it’s any consolation, by 8 p.m. ET on Monday, President Trump had gone a full, rare 48 hours without tweeting anything original, only retweeting four tweets during the two days. However, that lucky streak was broken early this morning by a string of tweets quoting various Fox News guests, before sending this final message: