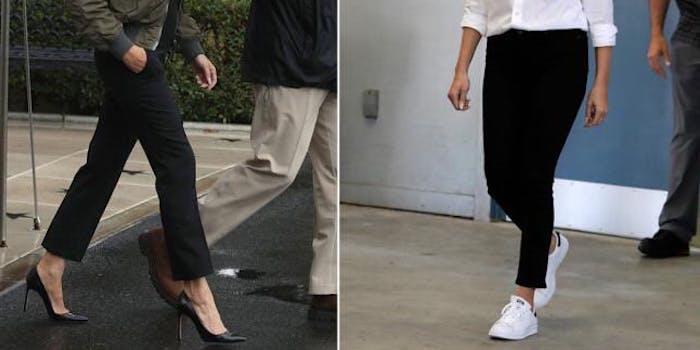 No, Melania Trump did not wear heels into a flood zone

The internet was not happy with the first lady's airplane-embarking wardrobe choices.

The internet exploded Tuesday morning when a photo showed First Lady Melania Trump wearing black stilettos on her way to visit the devastating aftermath of Hurricane Harvey in Texas.

Though the Trumps were taking a plane to meet emergency crews and victims in Copus Christi, all anyone could talk about was how effectively FLOTUS was going to do that in her “Top Gun aviators” and four-inch heels.

@MELANIATRUMP LOSE THE STILETTOS!!!! YOU ARE GOING TO TEXAS..NOT A FASHION SHOW!!!!!

Melania is now standing in a puddle in 4-inch heels acting like a first lady — give us a break. https://t.co/TNGAfVgLg1

Once she touched down in Texas, however, the first lady exited the plane wearing a more modest ensemble—including a black baseball cap that read FLOTUS and a pair of white tennis shoes.

Whether she changed footwear after reading the internet’s reaction, or planned her wardrobe change in advance, Melania did not show up to an emergency disaster zone in heels after all—so we could probably give her a break. And even if she did keep her heels on, the internet’s scrutiny of the first lady is an example of how women are critiqued more for their appearance than for their actions. A trip that should have focused on what happened when the pair met with victims instead turned into an episode of Fashion Police.

The couple is scheduled to visit Austin, Texas, on Tuesday evening. The internet will let you know shortly whether her shoes are too fashion-forward.

President Trump in Texas with Melania… oh & the haters are hatin! They're free to get out now! ❤️ I love our classy @FLOTUS #womenpower ❣️ pic.twitter.com/pmCuSdEAYz