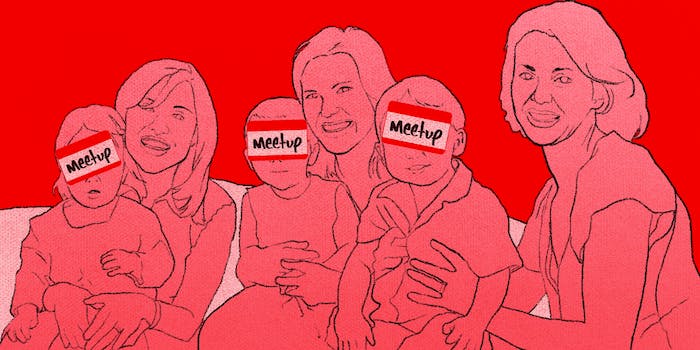 I went on mom dates on MeetUp.com, and it was just the worst

There's nothing on earth more terrifying than a roomful of frazzled, sleep-deprived new moms.

I’ve never felt more isolated than I did the first weeks I was home alone with my son after giving birth. No matter how many books, blogs, and birthing apps I’d read about motherhood, I still felt lost at sea. Of course, I loved my tiny, lovely baby son, even while he was pooping fountains and bruising my nipples. But I knew that the only way for me to maintain a grip on my sanity was to seek out a new circle of friends: other moms.

The trouble was, I didn’t actually know many new moms. So I wondered: Where could I find new friends, if I didn’t actually have time to go out and socialize? Then it hit me: I could make new mom friends on the Internet. After all, people signed up for online dating sites all the time. What worked for desperate singles would surely work for desperate moms looking for nursing buddies, right?

After some quick searching around during my baby’s 15-minute naps, I found exactly what I was looking for on Meetup.com, which describes itself as the “world’s largest network of social groups.” Basically, Meetup.com is a social platform for people with a wide range of interests, from Australian expats to ghost hunters. So it made sense that there would be groups in the New York City area for frazzled new moms.

Eventually, I found a Little In the City Meetup group in my neighborhood, Long Island City. I quickly signed up for a Friday New Mommy & Infant Meetup at one of the posh high-rises down the street.

Later that week, I found myself sitting on the floor with my 4-week-old son, surrounded by other new moms and their babies. We all had the same expressions on our faces: stunned and a bit exhausted, but clearly thrilled to actually be in the same room as other grownups. I learned (and forgot) everyone’s names, cooed at their babies, and propped my son up to look around at Mommy’s new best friends. I was beyond thrilled.

Then we started talking. Almost immediately, it became clear that we were all going to hate each other.

The biggest enemies of new moms are other new moms.

That day at the Little In the City meetup, I learned who the biggest enemies of new moms are: other new moms. Not because we’re bad or mean (although some of us certainly are), but because all moms are essentially competing in a high-stakes, never-ending game of “Am I fucking my baby up?” If the answer to that question is ever “yes,” the other new moms are more than happy to point it out.

For example, when I proudly told one of the other moms in the meetup group that I’d had a natural birth, I was shocked to see her recoil. “Why!?” she exclaimed, a horrified look on her face. Another mom who happened to be listening nearby gave an audible chortle. “I told them to give me the drugs the second I got to the hospital,” she said. Well, whoop-dee-doo. Good for you, lady.

At the time, I laughed and passed the comment off as a joke, as I often do when I’m feeling attacked. But needless to say, that conversation did not help cement any blossoming friendships.

These conversations with the new moms in my meetup usually devolved into similarly heated debates over topics such as strollers versus wraps, or formula versus breast milk. Everyone had different opinions, and no one else was entitled to their own.

It didn’t take much to spark such violent discussions. For instance, when I used cloth diapers in front of the other moms, they immediately got defensive. They clearly thought I was suggesting that their disposables were a crime against humanity, and that they should be ashamed of themselves for mistreating the environment. “Oh, my goodness! I could never do cloth diapers. Isn’t just having a baby enough work?,” a new mom would say, rolling her eyes in my general direction.

The mom meetups did, however, have one clear advantage: They gave every mom the chance to feel superior to the other moms. I got my chance to feel this way one day, when I happened to overhear a woman explaining how she gave up her dog because she just couldn’t handle taking care of the pooch and the baby. As a mom and longtime dog lover, I still feel superior to that woman.

But that lady got to one-up me one day in front of the other moms, when I revealed that my son, who was 3 months old at the time, wasn’t sleeping well. One by one, the moms said the most hateful mom-phrase in existence: “Oh, Rowan/Luca/Frieda sleeps through the night!” At that moment, part of my spirit died. I wondered why my child was up crying all night, while these women’s babies were sleeping like angels. I cried all the way home, convinced that I was the world’s worst mother.

I cried all the way home, convinced that I was the world’s worst mother.

After the sleeping incident, I didn’t go back to the meetup very often. The tipping point came when Gemma (not her real name), the one mom friend I kept from Little In the City, arrived at a meetup one day with her baby daughter in a wrap on her back. At one point, she later told me, she overheard one mother say to her mom-friend, “Oh, is that the weirdo you were telling me about?” That’s not cool to say about anybody, especially someone who’s in the same mom-boat as you. The only difference was that Gemma happens to not like strollers.

That’s why the moms who feel ostracized from mainstream mom meetups sometimes flock to the niche parent groups, which help you find kindred mom souls a little more easily.  For instance, are you a female parent who trades stocks? Join the Moms in Finance Network Meetup! Do you wear your baby in a wrap and live in Queens? Get together with the Astoria Crazy Wrap Group. Are you a hippie from New Jersey? Welcome to the Holistic Parents of Hudson County.

And it’s not just the New York-area that has something for everyone. Don’t eat wheat west of Boston? There’s Gluten-free Moms & Babies in Waltham/Watertown. Shy? Avert your eyes with the Metro-Boston Introvert Parents. Divorced and potentially a witch? Hook up with the Separated or Divorced with Young Kids Near Salem (the home of the Salem Witch Trials).

Divorced and potentially a witch? Hook up with the Separated or Divorced with Young Kids Near Salem group.

While these mega-specific meetups certainly make it easier for moms to meet like-minded individuals, there’s one problem with these events: They’re filled with other moms. That means judgment is always lurking under the surface. For instance, my friend Gemma told me that while she was attending a meeting of Holistic Queens Moms, she let it slip that her daughter slept in a crib. Suddenly, a roomful of judgmental eyes turned to her, with one mom hissing “Zookeeper!” at her between clenched teeth.

So ultimately, what’s the better option: working hard to surround yourself with like-minded people who justify your views on child-rearing, or attempting to broaden your mind by interacting with parents who do things a little differently? In the end, it doesn’t matter. You’ll be interacting with moms, so they’re going to judge you either way.

But even though the Meetup.com method has its drawbacks, it’s still much easier then trying to make mom friends in the real world. Last summer, I took my son, who is now a toddler, to a local playground, where we started chatting up some moms with similarly aged kids. After a while, I drifted out of the conversation to toss some wood chips with my son, when I overheard one of the moms telling her companion: “You know, I just don’t have time for any new friends. I’m too busy!” At that moment, I felt like a creepy dude at a bar, slinking away dejectedly from a potential conquest.

But even though the Meetup.com method has its drawbacks, it’s still much easier then trying to make mom friends in the real world.

These days, I no longer attend the mom meetups. There’s no longer any need to: Thanks to the Meetups, my son and I have made great friends, and we get to make playdates with these pals instead of throwing ourselves into a roomful of strangers and hoping for the best.

Sure, my mom friends and I occasionally argue over parenting techniques, but what friends don’t argue every once in a while? As long as we have each other, we can judge the other moms much more effectively.