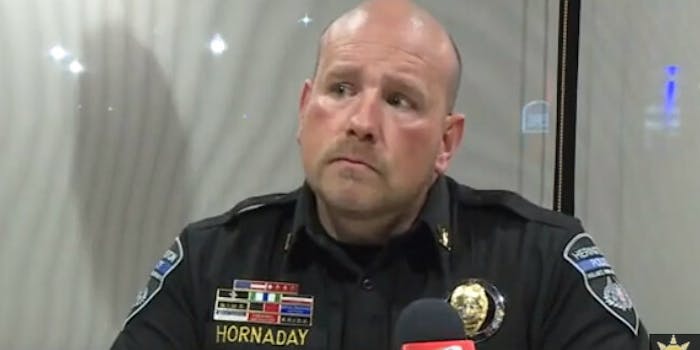 The lie went viral and sparked outrage across Facebook.

A Kansas police officer was forced to resign after video footage proved that a McDonald’s employee did not write “fucking pig” on his coffee cup. The photo went viral and sparked outrage in recent days.

The 23-year-old Kansas officer admitted to writing the message himself and said it was “meant to be a joke.”

In a now-deleted Facebook message, Herington Department Police Chief Brian Hornaday posted the image of the order ticket along with a message detailing its discovery. At the word of his employee, he claims the officer received the demeaning message when he patronized a nearby Mc Donald’s. The chief went on to state that McDonald’s staffers only offered a Big Mac and fries as consolation.

Social media and locals called for a public apology from the fast-food chain and for the employee to be fired. The Geary County Sheriff’s Department weighed in, too, posting a Facebook message offering advice and suggesting to hold opinions until all facts were determined.

Unaware of his co-worker’s shenanigans, the chief continued to stir the pot and the fake photo went viral. The community rallied behind the police chief and his subordinate. Soon the attention turned on the Junction City McDonald’s, and its employees started receiving threats.

Dana Cook, the franchise owner, released a statement to KSNT:

“McDonald’s is a strong supporter of our police, military and first responders. In fact, I have several family members who are law enforcement officers. We take any incident like this seriously and are currently investigating the allegation made.” she stated.

The investigation gathered video evidence that showed McDonald’s employees did not write “fucking pig” on a cup.

“We thoroughly reviewed our security video from every angle, which clearly shows the words were not written by one of our employees,” Cook said.

The police chief apparently went into damage-control mode, firing the officer and issuing a public statement.

“This was completely and solely fabricated by a Herington police officer no longer employed with the agency,” Hornaday told reporters on Monday.

Many on social media called out the police chief for escalating the situation without proof and even called for his subsequent termination, too. Twitter user @AlpineAddiction called the incident a “hazardous situation” when responding to a tweet calling the investigation a waste of resources.

“Exactly. Tax money and time went into that. And the Chief needs [to be] held accountable for not following up before creating a hazardous situation for the franchise and employees. People are dangerous and reactive these days, someone could’ve been hurt over a ‘joke.'” he wrote.

Exactly. Tax money and time went into that. And the Chief needs held accountable for not following up before creating a hazardous situation for the franchise and employees. People are dangerous and reactive these days, someone could’ve been hurt over a “joke”

“They do shit like this and act all surprised that people don’t trust them.” tweeted DBrewer8318.

They do shit like this and act all surprised that people don't trust them.

“The officer and police chief are both jokes and should be removed immediately, yes.” said another.

The ex-officer who started the hoax is a former military police officer in the Army and had been in the town’s force for only two months.

“Now, this is absolutely a black eye on law enforcement,” he said. “I truly hope that the former officer of the Herington Police Department that did this, I hope he understands the magnitude of the black eye that this gives the law enforcement profession from coast to coast. None of us can be excluded from that.”