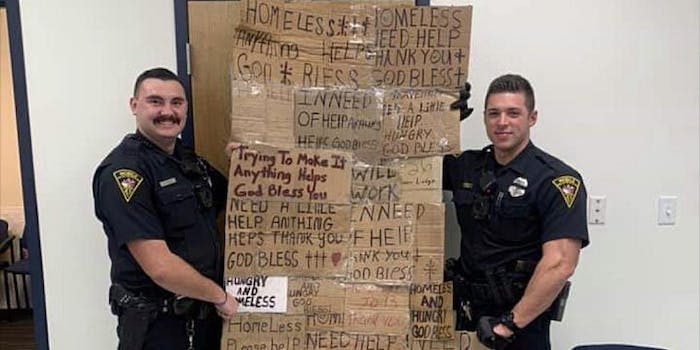 The 'quilt' was intended to be a gag gift for the officers' superior.

Two Mobile, AL police officers, Preston McGraw and Alexandre Olivier, recently sparked massive online outrage after an image of them went viral. In the photo, the two officers were holding a makeshift “quilt” constructed from confiscated cardboard signs taken from panhandlers. The “homeless quilt” was apparently intended as a gag gift for their superior.

The post was originally featured on one of the officers’ personal Facebook pages and has since been deleted. “Wanna wish everybody in the 4th precinct a Merry Christmas, especially our captain,” read the accompanying caption. “Hope you enjoy our homeless quilt! Sincerely Panhandler patrol.”

Reactions to the post criticized the officers’ apparent utter lack of empathy in trivializing the suffering of Mobile’s homeless citizens.

Here you have police in Mobile Alabama glorifying signs they seemingly took from homeless people who were asking for help during the holidays….with a Blue Lives Matter flag draped behind them. pic.twitter.com/a216IfyXFT

Officers from @MobileALPolice made a "quilt" out of signs they apparently confiscated from homeless people as a gruesome gift for their precinct.

How you could even think of creating such a thing, let alone pose with it smiling like this, I have no idea. pic.twitter.com/0Rse8CzymT

“Why do you hate the police so much??” pic.twitter.com/v5QIS3cQ29

On Monday, the controversy resulting from the image caused Mobile Chief of Police Lawrence Battiste to issue a statement of apology.

“As a police department entrusted with serving and protecting our community, we offer our sincerest apology for the insensitive gesture of a Facebook post by two of our officers,” said Battiste in a statement via the Mobile Police Department’s official Facebook page. “Although we do not condone panhandling and must enforce the city ordinances that limit panhandling, it is never our intent or desire as a police department to make light of those who find themselves in a homeless state.”

Due to a controversial law passed in 2010, panhandling in restricted areas in Mobile can result in a fine of up to $500, community service and/or up to 6 months in jail.

According to BuzzFeed News, an administrative investigation regarding the officers’ actions is underway. Officers McGraw and Olivier reportedly will remain on duty and on active patrol during the investigation.