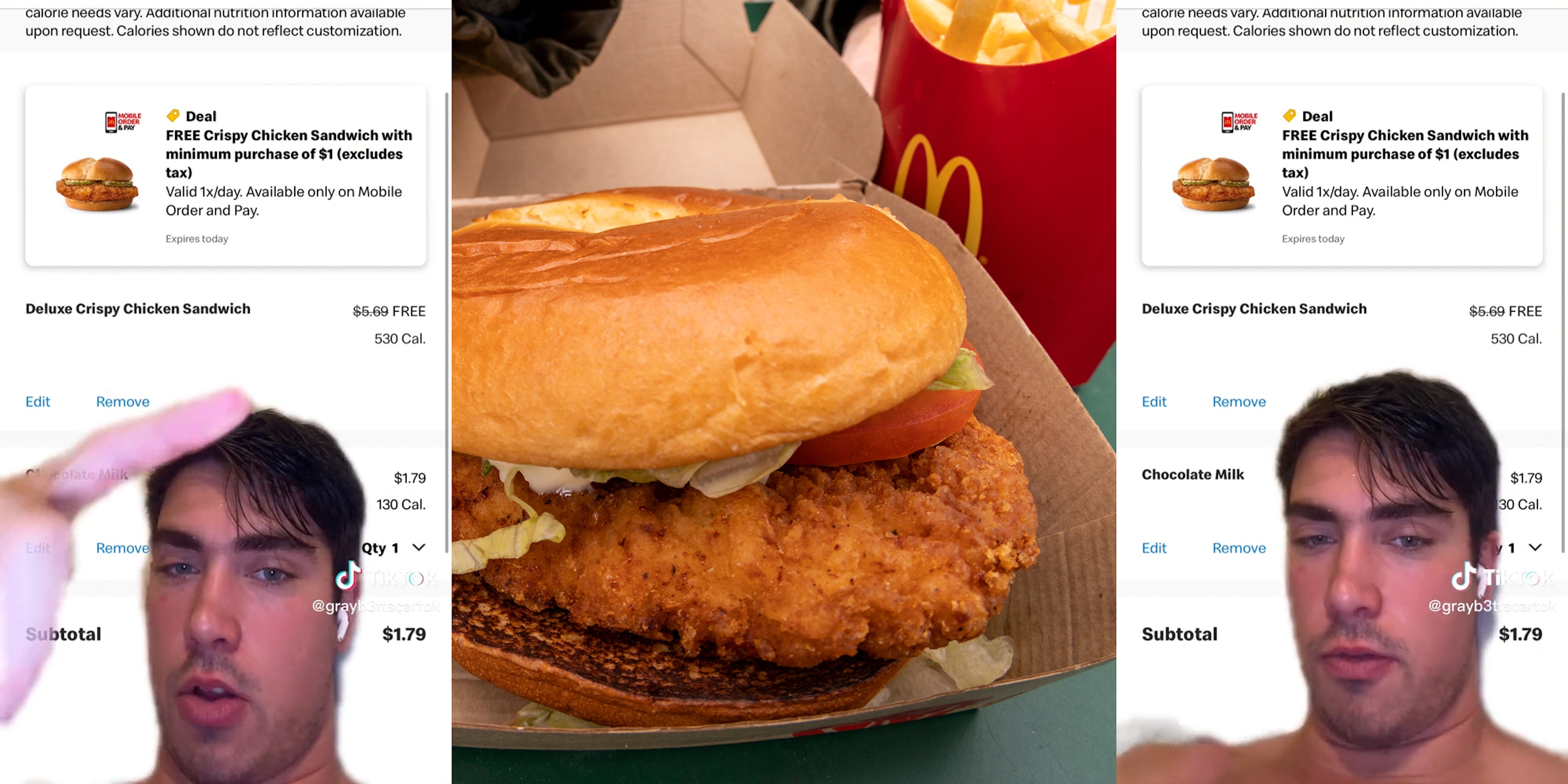 ‘I’ve had this almost every day for the past 4 years’: Customer shares hack for free Crispy Chicken Sandwich from McDonald’s

A McDonald’s customer went viral on TikTok after sharing a McDonald’s app hack for a free Crispy Chicken Sandwich.

In the video, user @grayb3ttscartok displays his mobile order behind him on the screen. The order shows a Crispy Chicken Sandwich that has been discounted from $5.69 to free. “For those who don’t know, you can pretty much get a free Crispy Chicken Sandwich with a minimum order of $1 almost any day of the week,” he says. The TikToker typically purchases chocolate milk to reach the $1 minimum, which can be seen in his order. The total for the two items ends up being less than $2.

The video was viewed over 23,000 times since it was posted on Nov. 12. Many viewers in the comments section pointed out that the hack may not work for everyone because of how the deals vary.

“BTW it’s in different in every location buddy. I travel a lot and the app deals vary a ton even within the same state,” one viewer commented.

“You realize everyone gets different deals depending on what you order and how many times you use certain deals like they can end up capping you,” a second wrote.

“This is only for the first few times you order on the app, to get a deal like this is rare,” another commented.

@grayb3ttscartok responded in the comments, writing, “I have used this maybe 1000 times. Guess I’m lucky. I’ve had this almost every day for the past 4 years lol.”

“Damn I’m jealous, I’ve only had the free fry any size with a chicken sandwich,” one person shared.

“This is crazy lol you can get a large fry for a dollar too,” a second commented.

“Its always a big mac not a crispychicken,” a third wrote.

The McDonald’s website offers this explanation for why some deals disappear: “New deals are added to the McDonald’s app regularly to give you a variety of choices and discounts! Deals are removed from the Deal screen once they expire or have been used.” The only deals that are relatively consistent are $1 large fry, 99-cent any size coffee, and Free Fry Friday.

The Daily Dot reached out to @grayb3ttscartok for comment via TikTok comment and to McDonald’s via email.